Julia and Willie search for Barnabas.

Dawn over Collinwood and those that sleep do not even dream over the fate of one of their family. A man left in the woods to die by a woman who thinks that at dusk he will rise inhuman, invincible, as evil as she is, and that together their nights will last for all eternity. But in an Old House on the estate another woman, who fears the man's fate, tries desperately to do something about it.

Nicholas finds Adam very weak and near death. Angelique has stolen the mirror so Nicholas can not find her. Nicholas vows to make her pay for this. Meanwhile after failing to find Barnabas, Julia and Willie return home, and Julia realizes that she herself was freed of vampiric influence when Tom Jennings was staked. Knowing that Adam is likely endangered and that Angelique's coffin must be at Nicholas' house, she goes to the house by the sea and confronts him about the coffin, telling him that the only way to save Adam is to destroy Angelique. Julia gives Adam an injection of plasma, which helps both Barnabas and Adam and revives Barnabas enough to call out for help. Julia then leaves a wood stake for Nicholas to use, despite his continued insistence that he knows nothing about someone named Angelique. Soon Willie finds Barnabas in the woods, and Julia takes Barnabas to Windcliff. Realizing that Julia is right, and worried that Angelique will bring the wrath of his own Master down upon him, Nicholas plans to destroy Angelique and goes to her coffin with a stake and a mallet.

Nicholas (to Julia): Really Doctor, you've been reading too many gothic novels.

Nicholas: I shall enjoy being honest with you, Dr. Hoffman.

Julia: (to Nicholas) You have won again and I mind very much.

Dark Shadows - Episode 621 on the IMDb 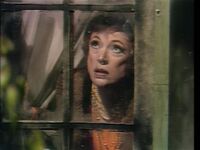 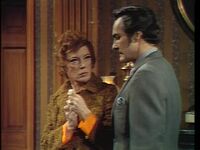 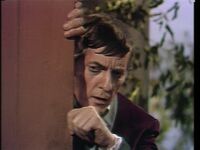