Victoria hides Barnabas in the closed off part of Collinwood.

Even in the warm light of day, the effects of evil forces can be felt and seen in and around the great house at Collinwood. In grave danger and too weak to move on, Barnabas Collins has realized he is lost in the woods and may die before help can come. But through some strange mental bond that exists between them, Victoria Winters has sensed that Barnabas is in desperate need of her.

Barnabas asks Victoria to hide him and not take him to Julia. Victoria thinks of a place in the West Wing where she can hide Barnabas. Meanwhile, Julia visits Joe and admits that she knows he is the victim of a vampire because she once was as well. She begs him to tell her who the vampire is and who is protecting her, but he reminds her how difficult it is to talk under the vampire's influence. She asks if it is Nicholas. Joe denies it is Nicholas but tells her not to go to him. Despite this, Julia decides to have a showdown with Nicholas.

Julia visits Nicholas and says she wants to stop playing games. She tells him she knows he was behind the experiment to create Eve; that Barnabas is the victim of a vampire, and that she knows he is harboring the vampire. She tells him that Barnabas has disappeared which gets Nicholas' attention, though he still denies his involvement She says that Barnabas may die and reminds him that if Barnabas dies, Adam dies. If Adam dies, that upsets Nicholas' plan. Despite his initial denials, Nicholas pledges to help her find Barnabas and says that he admires her for coming to see him, much to her puzzlement.

After night falls, Julia realizes that Nicholas may have been trying to get her to leave, and she decides to stay and keep watch. In the abandoned part of Collinwood, after waking from a long sleep, Barnabas begs Victoria to bring him a cross. At the house by the sea, Nicholas confronts Angelique, slapping her and telling her to let Barnabas alone. Angelique grudgingly agrees but tells Nicholas he works out all his plans to suit himself. He says that is one advanatage to being the Master. Meanwhile, Julia, who is still keeping watch in the woods, finally sees Angelique.

Julia (to Joe): I know that you've been under the spell of a vampire.

Julia: I've got to have a showdown with Nicholas Blair.

Julia: I do believe I've upset you. You're not as self assured as when I first arrived.

Nicholas: Don't try my patience, doctor, don't do it.

Nicholas: I rather admire you for coming here this afternoon.

Dark Shadows - Episode 619 on the IMDb 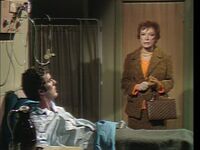 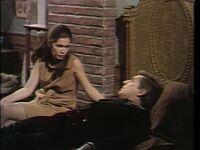 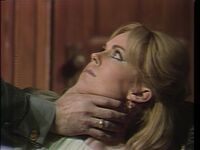