Angelique has hidden Barnabas in a remote shack and plans to turn him into a vampire and take him away with her.

It is late at night at Collinwood, but for one man, there will be no more sleep this night, for he has had a strange and perhaps prophetic dream, a dream which has warned of tragedy in the life of a young woman. Now his task is to warn her and hope that she will listen and change her plans for the future.

Roger tells Victoria it will be a mistake to marry Jeff. He tells Victoria about the dream. If she marries, she will die. Victoria reminds Roger that he does not believe in the supernatural. She says that she believes that Roger must have something against Jeff. Roger admits he does not trust Jeff, and they argue. Roger tells her that marrying Jeff will be the greatest mistake of her life, and Victoria angrily responds that they will be married before storming off upstairs.

A distraught Julia enters, and Roger offers her a drink, but Julia is too worried about Barnabas because he has disappeared. Meanwhile, Barnabas is in a shack with Angelique, where she tells Barnabas that they are leaving together, despite what Nicholas has planned. Then she bites him again and tells him that she still fondly remembers the night they spent in Martinique. She claims they made a pledge that night, but Barnabas denies it. She admits that she is going to turn him back into a vampire, but he points out that if he dies now, he will not become one. She says he will survive this night and that he will be safe here in the shack, asleep, before going off to her coffin.

The next morning, Julia tells Victoria that she has been looking for Barnabas all night and that she is worried about him. Julia asks Victoria to wake her if Willie comes up to let her know Barnabas has returned. In the shack, a weakened Barnabas attempts to leave to go to Victoria for help, deducing that Angelique will suspect if he goes to Julia, Willie, or even Stokes for help , but when he leaves the shack, the sunlight hurts his eyes.

At Collinwood, Roger apologizes for the things he said about Jeff, and Victoria forgives him. At the same time, Barnabas makes his way through the woods and calls to Victoria for help - he must still have a psychic link with Victoria, because she responds to his call, much to Roger's distress. Victoria finds him in the woods. He says it is too late before passing out.

Roger: (to Victoria) You know how Elizabeth and I feel about you. You're a member of our family.

Dark Shadows - Episode 618 on the IMDb 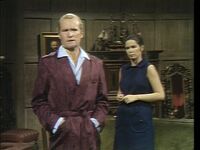 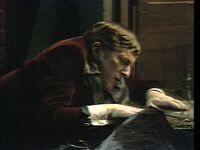 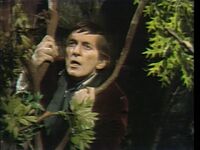