Roger dreams that if Victoria marries Jeff she will die.

An autumn dusk has settled over Collinwood bringing with it not the fear of night, but a renewed hope of happiness for a young woman long acquainted with the terrors that have plagued these premises. But as the deepening dark surrenders to the night, a new threat, evil and secretion and awesome in its consequence will reveal its final purpose, the destruction of Victoria Winters.

Victoria accepts Jeff's marriage proposal and they say they are getting married in less than a month. Victoria asks Elizabeth to be her matron of honor. Elizabeth asks Victoria if she will allow Roger to give her away.

Eve intercepts Jeff at the terrace and tells him he is Peter Bradford and that she loves him. Eve kisses Jeff in an attempt to make him remember he is Peter. Roger catches them. Jeff says he cannot explain and that it was a mistake. Roger says he is worried about Jeff's attitude and character and that he is going to tell Victoria to keep her from marrying him. Jeff begs him not to, but Roger claims he will be doing it for Victoria's sake.

After Victoria sees Elizabeth off to bed, Roger and Jeff enter, still arguing. Roger asks Victoria to come to the drawing room, and Jeff says Roger will be destroying some of the happiest moments of her life. Roger, moved by this appeal, says that it can wait, but Victoria insists. Instead of telling her about Eve, he lies and says it is about Barnabas. He says he is worried because Barnabas is missing from the Old House. Victoria leaves, only briefly mollified, and Jeff thanks Roger for not telling her, but Roger says he didn't do it for Jeff but for Victoria. After Victoria returns, Roger retires for the night. Jeff tells her that he and Roger were fighting because he did not want her to worry about Barnabas. Roger goes to Elizabeth and tells her about the woman, but Elizabeth defends him to Roger, saying that Jeff is the only one who can make Victoria happy. Downstairs, Jeff and Victoria discuss the wedding in the drawing room while Eve watches through the window.

That night, Roger dreams about the wedding. When Victoria's veil is lifted, there is a skull instead of her face. He awakens and says aloud that if Victoria marries Jeff, she will die.

Roger:  Really? I had the distinct impression that you were rather well acquainted.

Dark Shadows - Episode 617 on the IMDb 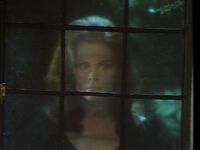 Eve in the Window 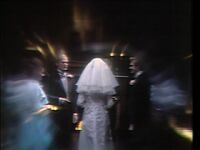 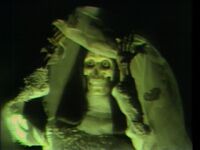