Julia and Willie lock Barnabas in a cell in the basement to keep him from going to Angelique.

The western skies, streaked with red from the reflected sun. It has already set on Collinwood and even the fast gathering dusk cannot hide the blood-colored stains that announce the coming of night. A night not dark enough to conceal a new found terror, or prevent the rebirth of an old despair.

Julia and Willie wonder who the vampire is. In the meantime, to keep Barnabas safe, they put him in the cell in the basement. Julia locks Willie in with Barnabas to take care of him. They have forgotten about the secret door. He tells them he wants no help and to go away and leave him alone. He accuses Julia and Willie of trying to torture him. Julia wants to know who the vampire is.

Nicholas visits Maggie, who is worried about Joe. She informs Nicholas that Joe is not dead. Maggie says Joe's claims are not reasonable. Maggie says she does not believe Joe, but Joe is convinced that Barnabas was trying to kill him, so he was going to kill Barnabas first. Maggie wants to see Barnabas, so after some resistance Nicholas gives in and takes her to the Old House.

Barnabas begs Willie to let him go free. He asks Willie for food, but Willie tells Barnabas that he cannot get out either because the door is locked. He hits Willie over the head with a bottle that's serving as a candle holder, and he escapes through the secret door. Julia finds Willie knocked out.

Nicholas: (to Maggie) I'm yours to command.

Barnabas: (to Willie) As your master I cannot command you now. I beg you to let me go free.

Dark Shadows - Episode 616 on the IMDb 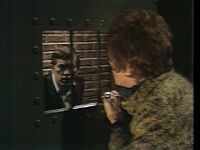 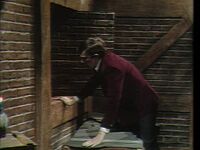 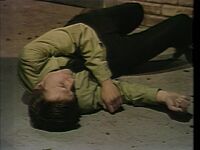 Willie Unconscious
Add a photo to this gallery
Retrieved from "https://darkshadows.fandom.com/wiki/616?oldid=142145"
Community content is available under CC-BY-SA unless otherwise noted.