Again the sounds of shrill police sirens have broken the silence on the great estate of Collinwood. For one man has tried to kill another, and vowed that he would keep trying until the deed is done.

Mrs. Johnson tells the sheriff that she saw Joe try to kill Barnabas. Julia overhears the account. The sheriff believes that someone has driven Joe over the edge, and he says he is going to get to the bottom of things. Julia asks Barnabas why he is protecting the vampire. Mrs. Johnson apologizes for the police involvement, but she says Roger called them. The sheriff questions Barnabas who tells the sheriff he found Joe in the woods injured. Barnabas says he did not report Joe's sucicide attempt because Joe is a friend. Barnabas writes off the murder attempt by saying Joe is insane. The sheriff asks if the attempt is over a woman. Barnabas is distracted by the dog's howling but denies the attempt was because of a woman.

Meanwhile Angelique rises from her coffin. She summons Barnabas while he is talking to the sheriff. The sheriff says he will have more questions after the medicine is examined. Barnabas becomes confused. The sheriff asks what is wrong. Barnabas does not tell him anything, so he leaves.

The sheriff questions Julia about Barnabas' health and tells Julia he was distracted by the dogs. Julia begins to suspect something is wrong. After the sheriff leaves, Barnabas will not come to Angelique so she apppears to him. She is upset Joe is not dead. She bites him again. Julia comes in to find him in a weakened state. She finds the bite marks.

Julia: The woods are scary.

Mrs. Johnson: I've always prided myself in not saying too much.

Dark Shadows - Episode 615 on the IMDb

Dark Shadows Everyday - Episode 615 - The Truth About Cats and Dogs 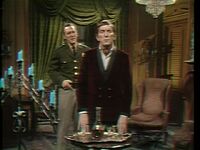 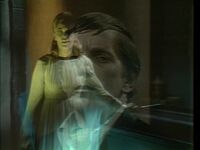 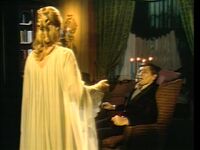 Angelique Appears
Add a photo to this gallery
Retrieved from "https://darkshadows.fandom.com/wiki/615?oldid=142141"
Community content is available under CC-BY-SA unless otherwise noted.