Mrs. Johnson walks in while Joe is trying to kill Barnabas.

The great estate of Collinwood has seen many secrets. Secrets which have led to horror, to violence, even to death. And in the Old House on the grounds, another secret is working its spell. For two men bear the mark of the vampire, and one insane with jealousy and suspicion is taking his revenge.

Mrs. Johnson walks in while Joe is trying to kill Barnabas; Joe runs off. Elizabeth and Roger find Joe in the Collins mausoleum and bring him back to Collinwood. Joe admits that he tried to kill Barnabas and says he will try again. Roger calls the police.

Joe: (about Barnabas) No one knows what he's really like!

Roger: So many many things have gone on in this house, so many strange things have been attributed to the Collins family.

Elizabeth: The dead walk here. The spirits are watching us, they envy us, they hate us because we are alive.

Mrs. Johnson: I just can't figure out people anymore, it's as though everyone has lost control of his senses, even a sane man like Mr. Barnabas.

Mrs. Johnson: Everyone tells me the sensible thing to do is the crazy thing to do.

Dark Shadows - Episode 614 on the IMDb 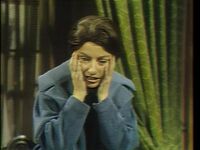 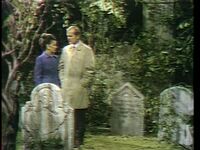 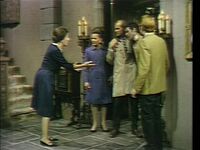 Joe Unconscious
Add a photo to this gallery
Retrieved from "https://darkshadows.fandom.com/wiki/614?oldid=129758"
Community content is available under CC-BY-SA unless otherwise noted.