The hour of dawn lingers far out at sea beyond cliffs of Collinwood, as though reluctant to bring the light of day to the land around the ancient house, sensing perhaps that an endless dark is more suited to the evil deeds that could be done this day, when two men trapped by the same unearthly force become tangled in a plot that could mean the destruction of one or the other.

Julia stops Barnabas from giving Joe the poisoned medication. Julia starts to become suspicious of Barnabas when she discovers the medication had poison in it. Mrs. Johnson tells Julia how Barnabas was found passed out in the woods the day before. Joe tries to strangle Barnabas.

Barnabas: (to Julia) I'm honored by your new found trust.

Julia: (about Joe) Barnabas you can't fall asleep. You must wakeup. He must be watched every minute until morning.

Dark Shadows - Episode 613 on the IMDb 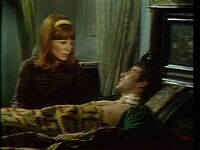 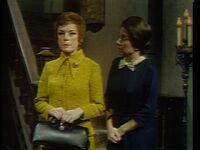 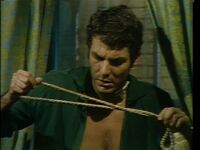 Curtain Call
Add a photo to this gallery
Retrieved from "https://darkshadows.fandom.com/wiki/613?oldid=129754"
Community content is available under CC-BY-SA unless otherwise noted.