Nicholas proposes marriage to Maggie, however she turns him down because she is concerned about Joe.

The plans of many people will be changed or threatened by the events of this night, events occuring in a large old house by the ocean, and in the mind of a strange young woman, subjected to the spell of a mysterious man. Placed in a hypnotic trance by the flame, her eyes have looked away throughout a great void and into the past, seeking the true identity there, of a man she has just met in the present. What she learns from this fleeting look through the flame, and a moment in the eighteenth century, may have tragic results at Collinwood.

Eve awakens, convinced that Jeff Clark and Peter Bradford are one and the same. She tells Nicholas that she loves Peter and will do anything to be with him. Nicholas tells Adam he plans to take Maggie Evans with them when they leave Collinsport. Nicholas proposes marriage to Maggie, however she turns him down because she is concerned about Joe. Nicholas gives Harry some poison to put in Joe's medicine.

Adam: (to Nicholas) Are you in love with Maggie Evans?

Dark Shadows - Episode 611 on the IMDb 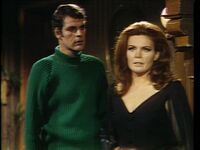 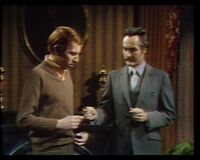 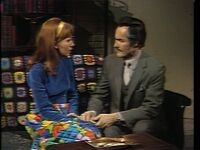 Indecent Proposal
Add a photo to this gallery
Retrieved from "https://darkshadows.fandom.com/wiki/611?oldid=142142"
Community content is available under CC-BY-SA unless otherwise noted.