Eve tells Jeff he is Peter Bradford and they were lovers in a previous life.

The great house at Collinwood has known many dark and sinister secrets. Now it is the scene of another one. A secret that had its origin in the late 18th century. A secret that has mysteriously transcended time and space to create a threat to the future of two young people. So deep in the supernatural is this secret, that not even the young man it concerns is aware of it. But there is one who is... a strange woman who recognizes him as someone she knew in 1795.

In the garden, Eve recognizes Jeff as being Peter Bradford. He panics when she calls to him, not recognizing her.

Jeff asks Eve who she is and denies being Peter Bradford. Eve tells him she watched him die and is bewildered that he does not recognize her. Peter angrily tells her not to call him Peter and Eve decides he does not recognize her because she looks different than when they lived before. He tells her to leave and not come back and goes nearly fetal when she won't shut up. She declares that he must be Peter and tells him she won't rest until they are reunited and leaves. Inside Elizabeth is feeling well enough to read letters and tells Victoria she needs to thank Jeff for all he has done. Victoria tells her they have reconciled and are planning on getting married soon. Elizabeth offers to help Victoria with her wedding plans and hopes it will stop the death-fear. She relapses into melancholy and recalls her recent death-like state.

Outside Jeff tries to pull himself together as Victoria joins him. He asks Victoria if he can talk to Elizabeth after their date. Victoria is concerned and he tries to convince her he is just worried about starting a new job. Victoria has her doubts. After they leave the garden Eve returns, only to be seen by Elizabeth, who decides she is the Angel of Death. Eve panics and runs off, but Elizabeth looks unafraid. Nicholas is around when Eve returns. He asks Eve where she has been and she says she doesn't want to talk right now, but he orders her into the drawing room. He tells her she is trying to ruin his plans, that he has heard about the fight she had with Carolyn and she accuses Adam of whining and running to "Papa Nicholas". Nicholas slaps her. She says she hates him and he reminds her of her mission. He demands to know what happened and tells her she will pretend to love Adam. She tells him it isn't possible because he is spoiled. Nicholas tries to find out where she was and she tells him she was just in the garden. He tells her to stay out of sight. She tells him someone did see her and he threatens to harm her if she doesn't cooperate. She tells him she must be important to her plans and he needs her. He tells her not to try to make any deals because she is not indispensable. She asks him who she was and where she came from. He tells her she was nobody, and she tells him she knows he was lying because she has met someone she knows she loved in another lifetime, and she wants to know more about him. She begs Nicholas to tell her and Nicholas looks at her dumbfounded.

Nicholas tries to process what she has told him and tries to figure out who she could be talking about. He tells her she did live before, but the less she knows about her previous life, the better. She begs him for information and instead he asks who this man is, not from the previous life, but who he is now. Eve panics and tries to withhold the information. She trades the name Jeff Clark (who is really Peter Bradford) for information, but Nicholas just asks when he was Peter. He says that if they are the same person, then there are other forces at work here and seems very concerned. Eve asks him what he means and offers to help in any way she can, Nicholas grins and says she is going to tell him more. He then has her sit down and turns off the light and lights a candle. He hypnotizes her and has her remember when she was alive before. She remembers when she confessed to Peter about killing Phillippe Cordier and Peter tells her he is going to tell the authorities everything, but he will give her until tomorrow morning to get out of Collinsport and after that he never wants to see her again. Eve comes out of the hypnosis knowing she was right!

Elizabeth: (to Eve) I know who you are. You've come to warn me that I haven't much time left. You're the Angel of Death.

Nicholas: (to Eve) You're doing everything you possibly can to ruin my plans and you casually ask me 'what's the matter'?

Nicholas: (to Eve) If it is true that they are one and the same, then there are forces at work here that I don't know about.

Peter (to Danielle): Maybe I do feel something for you, and that's the only reason I haven't turned you in and let them hang you. But I'm going to the authorities, do you understand? I'm going to tell them everything, tell them everything about you. But I'm going to give you more of a chance than you gave Phillipe. You've got until tomorrow morning, just tomorrow morning to get out of Collinsport. Now get out of my life. I never want to see you again. Never.

Eve (coming out of the hypnotism): I was right! Nicholas, he is Peter Bradford, and I love him! I love him!

Dark Shadows - Episode 610 on the IMDb 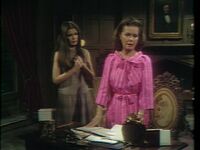 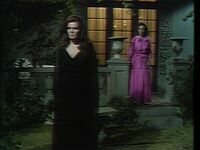 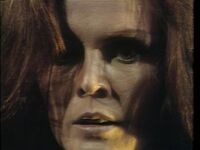 Eve Remembers
Add a photo to this gallery
Retrieved from "https://darkshadows.fandom.com/wiki/610?oldid=138464"
Community content is available under CC-BY-SA unless otherwise noted.