A new day at Collinwood, and a sharp wind blows from the ocean. And in a house by the sea, one man tries to fight an emotion as strong and relentless as the waves themselves: love. Love for a woman that is denied him.

Adam is writing a letter while Harry looks on. He gives him the letter to take to Carolyn, but Harry mocks him for his evident fondness for Carolyn. With some threats, Harry is persuaded, and he leaves on his errand as Eve walks in the room and glares evilly at everyone.

Adam and Eve chat about the weather, in which it becomes evident that Eve has memories that Adam never had. She says she wants to leave, in disobedience to Nicholas' wishes, but Adam begs her to stay, because he has a surprise for her.

Harry delivers the letter, and evades, somewhat lamely, Carolyn's attempts to find out where Adam is. She says Harry can tell Adam "yes," and that "she is very happy."

Back at Nicholas' Harry delivers his message to Adam, and leaves after throwing some jibes about how Nicholas wouldn't be happy to know about all this, and what bad company Adam and Eve are, with their incessant arguing. Adam calls to Eve and tells her they're leaving the house without Nicholas' knowledge. She's all excited about leaving forever, but Adam says they're just paying a visit to Collinwood to see Carolyn, making Eve laugh and laugh...

Outside Collinwood that night, Jeff waits for Victoria to get ready for their date and is joined by Carolyn. Having heard a noise, she gets nervous and tries to get Jeff to leave but he hides in the bushes and finds David coming in the gate. David appears to be angry and suspicious of Jeff at the prospect of Victoria going away with him, so Jeff tries to win him over by saying he wants David to show them around Boston. David counters that maybe Jeff has already been there, in his past life as Peter Bradford. Jeff gets hysterical and starts yelling and shaking David before he snaps out of it and apologizes. David appears unconvinced.

Carolyn paces, anxious about the idea of Adam and Eve visiting. When they show up, Adam and Carolyn are obviously pleased to see each other, and Eve has complete disdain for both of them, openly sneering at Carolyn. Eve is asked not to stand near the window, but she refuses to pay attention to them. Angry at Adam's attempts to manhandle her away from the window, she walks out on both of them.

Meanwhile, David and Jeff continue to talk outside, with Jeff slowly winning David over with the offer to be the ring bearer. In a better mood, David leaves to fetch Vicki. As soon as he's out of sight, Eve approaches and catches sight of Jeff. Stunned by a flash of recognition, she gasps "Peter Bradford!"

Dark Shadows - Episode 609 on the IMDb 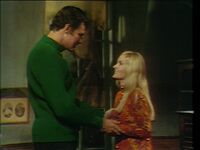 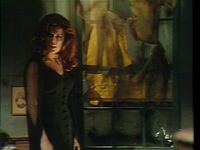 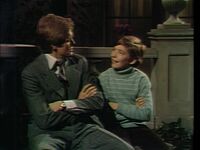