Night over Collinwood. A dismal night that promises new disasters, for in a house by the sea, an ageless drama is being acted out. And one man has discovered that both sacred and profane love can leave you completely alone.

Joe reflects that his life is ruined by Angelique who confirms that she doesn't care. He picks up a letter opener and attempts to kill her, but she is relatively unthreatened. Eventually he turns to self-loathing, and while Angelique tries to leave the room, bored, he apparently commits seppuku with the letter opener and collapses.

Angelique finally becomes agitated at the thought of the repurcussions she's going to face from Nicholas when he comes back and finds a near dead Joe on his floor. In a panic, she calls for Barnabas. Julia finds the bite marks on Joe's neck. Joe threatens to kill Barnabas when he finds he too has the bite marks on his neck.

Dark Shadows - Episode 608 on the IMDb

Dark Shadows Everyday - Episode 608 - You Are My Someone 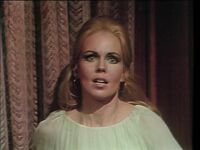 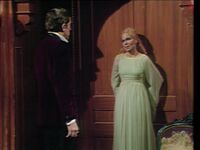 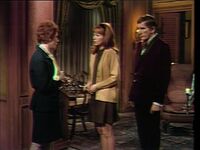 Maggie at the Old House
Add a photo to this gallery
Retrieved from "https://darkshadows.fandom.com/wiki/608?oldid=142454"
Community content is available under CC-BY-SA unless otherwise noted.