The walls of Collinwood are still obscured by darkness, but soon the light of morning will come for this long night is almost over. It has been a night of terror for one man who has been lured to a mysterious house by the sea and underwent a horrifying experience. An experience that will not only change his life, but the lives of others around him. And before this day is over, another man may die a terrifying death.

Adam is awakened from a nightmare by Nicholas Blair to tell him that Eve is safe. Nicholas tells Adam that Barnabas went to hurt Eve, but was intercepted by Angelique, who now controls him. Adam is sick and Nicholas notices he keeps rubbing his neck, and when he inspects Adam, finds vampire bite marks.

Adam doesn't know how he got the marks, and tells Nicholas of a frightening dream in which he was attacked by someone he could not see, and then felt weak and was frightened. Nicholas asks if Angelique has been there, but Adam says no. Nicholas says he needs to find Angelique before dawn, and Adam panics when Nicholas mentions her name and says he is frightened of her, but does not know why. Nicholas thinks he has figured out what’s going on and vows to protect Adam.

Just before sunrise, Angelique lays out her sunset plans for Barnabas, whom she shall have at last. Nicholas comes in and tells Angélique she must stay away from Barnabas, despite his earlier orders. He reminds her of Eric Lang's message about the connection between Adam and Barnabas they heard on the tape recorder (541). Nicholas tells Angelique that Adam has bite marks on his neck and is dazed and confused just like Barnabas. Nicholas orders her to summon Joe Haskell for her needs after filling her in on Adam's condition. She doesn't want Joe and accuses Nicholas of only wanting Joe attacked to get closer to Maggie. Nicholas tells her it doesn't matter, she must do as he says, to which Angélique reluctantly agrees.

Joe is drinking alone at the Blue Whale when Maggie comes in; he is in a daze and doesn't even notice her until she speaks. Joe hasn’t been to work and doesn’t want to hear a lecture from Maggie, who is here to meet Nicholas. Joe's been thinking about Maggie, who notices a glimmer in Joe’s eyes that reminds her of the way it used to be. Nicholas arrives for their date, ending the almost-tender moment. Joe thinks about Angélique as the sun nears setting; he casts a forlorn glance in Maggie's direction as he leaves. Maggie tells Nicholas she wants to forget Joe, so Nicholas ups the smarm to remove thoughts of Joe from Maggie's head.

Adam reads until Angelique enters the room, frightening him. Angélique asks Adam why is he afraid of her, and he says he does not know, but almost falls over trying to keep furniture between them and finally flees. Angelique laments that Nicholas gets what he wants while depriving her of what she wants and thinks he is doing it out of spite. She eyes the Mirror and makes plans to spoil Nicholas' plans.

Joe shows up at Nicholas' house. Angelique is furious because she didn't summon him and tells him she doesn’t want or need him. Joe doesn’t believe her, but she says she does not want him anymore and orders him to leave. Joe gets jealous when he realizes Angélique has another man, which Angélique confirms. Joe tells her that he must be coming over tonight and refuses to leave until he sees him so Angélique uses the mirror to show Joe Nicholas and Maggie's date, where Nicholas tells Maggie he’s falling in love with her as he drops her off at home. Nicholas tells Maggie that if she could feel about him as she did about Joe, they should continue seeing each other and she gives him a big kiss on the lips. Joe laments that Angélique has ruined his life, costing him his job and Maggie. He attempts to kill her with a letter opener; then switches from homicide to suicide. Angelique tells Joe he bores her and if he won't leave, she will, to which which he responds to by stabbing himself.

Joe: You've ruined my life, and you don't even care!
Angelique: Not particularly.

Angelique: Put down that letter opener. You look ridiculous.

Dark Shadows - Episode 607 on the IMDb

Dark Shadows Everyday - Episode 607 - In a World of Turtlenecks 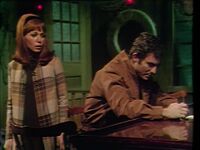 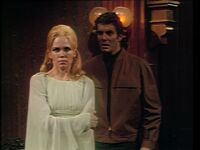 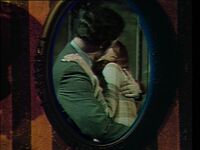