The great house of Collinwood is silent, and its residents sleep peacefully, unaware of the dangers that exist elsewhere. In a strange, isolated house by the sea, Barnabas Collins is risking his life to destroy an evil woman named Eve. He does not know he is approaching the greatest moment of terror he has ever known.

Angelique gloats to Barnabas that he is not rid of her; she gloats about his surprise and tells him how Nicholas resurrected her as a vampire. She bares her fangs and bites him.

Barnabas is weak and Angelique is victorious; they compare notes about who hates whom more. Angelique lords her psychic powers over Barnabas. Downstairs, Barnabas attempts to escape, but Angelique is waiting outside for him.

Nicholas decides it's time to leave, but Julia and Stokes keep him a bit longer. After some chat, Nicholas leaves despite the duo’s best efforts. Julia frets that Nicholas will do something when he finds Barnabas at his home.

Stokes berates and comforts Julia over her concern for Barnabas. Julia continues to fret despite the fact that Barnabas may be out of Blair’s house safely by now. Stokes reminds her that Barnabas made this choice willingly. Julia is sure Adam killed Barnabas, or that something worse happened to him.

Angelique gloats about Barnabas walking into Nicholas’s trap. Barnabas begs to be let go and asks for a cover story; he knows he'll be unable to tell Julia and Stokes the truth.

Nicholas comes home and Angelique reports success: Barnabas is under their power. He assures that he has her gratitude; he tells her that he will determine when she can see Barnabas. Angelique assures Nicholas that she will obey him. Nicholas tells her that this is her only warning.

Barnabas comes home and tells Stokes and Julia he’s all right, but their entire plan was a failure. Barnabas tells them that Adam and Eve weren’t at Nicholas’s, and that their horror will continue. Outside, Julia worries but Stokes quells her.

Alone, Barnabas frets about the inevitable appearance of Angelique. Later, she appears to him and orders him not to tell Nicholas about her appearance. She vamps him again.

Angelique: Yes, it's Angelique, your bride. The only bride you'll ever have.

Angelique: Your hatred for me could never be as strong as mine is for you.

Dark Shadows - Episode 606 on the IMDb 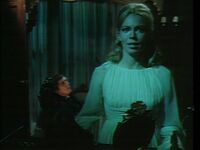 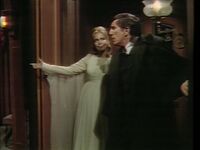 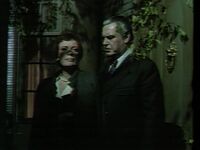 Julia & Stokes
Add a photo to this gallery
Retrieved from "https://darkshadows.fandom.com/wiki/606?oldid=142772"
Community content is available under CC-BY-SA unless otherwise noted.