Julia, Professor Stokes, and Barnabas plot to kill Eve, unaware that they are walking into a trap set by Nicholas.

Last night, a woman at Collinwood had a terrifying dream, in which she witnessed the death of the man who lives in the Old House on the Collins estate. Soon, Barnabas Collins will learn about this strange dream, but it will not prevent him from carrying out a plan, which will lead him to the most terrifying moment of his life.

Julia visits Barnabas and tells him that their plan is doomed to failure. Nicholas will kill Barnabas if he goes to Blair’s house this night. Barnabas wants Julia to give up her sources; he laughs before she recounts her dream, which he afterward tries to discount. Barnabas offers a psychological explanation for her dream. Barnabas says it’s too late to recall their plan; Stokes is already on his way to Nicholas’ house.

Stokes arrives at Blair's and is quickly offered a sherry; it seems Nicholas and Carolyn discussed Stokes at length. Stokes extends to Nicholas an invitation to a small dinner party at the Old House on Barnabas’ behalf. Nicholas has many queries; he thinks Barnabas doesn’t like him. Stokes states he had the same impression early on, but now he and Barnabas are friends. They talk about Barnabas’s eccentricities, both major and minor, and Nicholas is invited to the Old House at 10:00 PM. Stokes gets a tour of Nicholas' charming home.

Stokes and Nicholas part company after three hours, and he races to the Old House. Stokes believes that they are above suspicion; Nicholas is "an insufferable egotist" who can't believe "ordinary people... would dare to plot against him". Stokes has a very detailed sketch of the house, with three bedrooms on the second floor and a third floor storage section. Nicholas sleeps in one of the rooms, the overdecorated master bedroom, and they figure out which are Adam and Eve's rooms. Julia worries that Adam may be with Eve when Barnabas arrives. Stokes postulates that Adam didn’t receive a warm response from his mate. Barnabas goes over the plan, which involves a late arrival from Julia and the need for a sudden departure from Barnabas. Barnabas tells Stokes of Julia's premonitory dream; Stokes believes they are above suspicion. Alas, for they are being watched by Nicholas via The Mirror.

Stokes states that Joshua built the Old House in 1767 for Naomi. Stokes relates that he had an ancestor who worked for the Collins family. Barnabas serves up some booze and he and Stokes wonder where the usually-prompt Julia could be. The playacting begins. Nicholas excuses Barnabas, who skips out with the killing dose provided by Julia. Julia tells an inquisitive Nicholas that Elizabeth's condition is of great concern to the family.

Barnabas pokes around Nicholas' house. Stokes prattles on and on; Nicholas tries to excuse himself in order to pay Roger his respects. Julia improvises, stating that Roger retired as she was leaving. Stokes continues his dissertation. At Nicholas’ house, Barnabas enters Eve’s room. He moves to stab the body in her bed, but finds it to be a stack of pillows. He is greeted by Angelique, who bares her fangs.

Professor Stokes: (about Nicholas) Aside from whatever supernatural powers he may possess, the man is an insufferable egotist. I don't think he believes that "ordinary" people like us would dare to plot against him.

Dark Shadows - Episode 605 on the IMDb 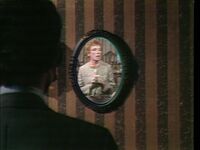 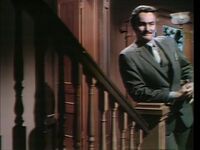 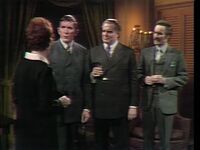 The Gathering
Add a photo to this gallery
Retrieved from "https://darkshadows.fandom.com/wiki/605?oldid=143357"
Community content is available under CC-BY-SA unless otherwise noted.