Elizabeth revives, Barnabas and Julia plot to kill Eve, and Victoria reunites with Jeff Clark. Julia has a prophetic dream.

For the mistress of Collinwood, this night could prove to be fatal, for she is convinced that death has summoned her. And soon, one young woman, who waits for her, will be convinced that Elizabeth Stoddard has indeed passed into the world beyond...

Jeff relates how he found Elizabeth, and how she made no sense. Victoria calls the doctor.

Upstairs, Julia has prepared a simple yet fatal injection for Barnabas to kill Eve. Barnabas is resolute to go through with their plan as soon as they get the chance. Julia worries that Nicholas may be trapping them, because he’s Nicholas Blair. Julia's miracle poison will kill Eve in 10 seconds, and leave her body in 2 minutes, making it appear as though she died of a heart attack. They discuss their plan to lure Nicholas to the Old House so Barnabas can destroy Eve.

Elizabeth declares that what she knew would happen did indeed happen and refuses Julia’s help. Elizabeth relates hearing that Julia declared her dead, thus fulfilling her ghoulish prophesy. Victoria admits that Elizabeth foretold these events; Elizabeth worries about what would have become of her if she’d remained in that state longer than a few moments. Pill-pushing Julia gives Elizabeth a sedative, then she and Barnabas take Elizabeth to her room. Alone, Victoria thanks Jeff for his finding Elizabeth. He apologizes for his acting like an idiot and mistreating her. Sans explanation, he asks for a second chance. Victoria is saved by the bell when the doctor arrives, affording Victoria the opportunity to leave the room.

Upstairs, Julia worries about Elizabeth's current condition. It is so much more than an exaggerated fear of death, it is as if Elizabeth can see Death. Barnabas reminds Julia that Cassandra's disappearance coincided with the beginning of Elizabeth' doom-saying (he must be thinking of her first disappearance, circa 520). They wonder if Nicholas might have resurrected Cassandra.

Downstairs, Victoria comes into the drawing room to report on Elizabeth's condition and gets pressed for an answer from her ex-fiancé. She kisses him in response. Barnabas comes down and becomes dejected at the sight.

In her room, Julia enjoys a book. Victoria visits her and they discuss Elizabeth's catatonia. Julia believes the state Elizabeth experienced tonight could recur; Victoria wonders how they will prevent Elizabeth's live burial. Julia vows that she won’t let that happen. Julia learns that Jeff and Victoria are on again and congratulates her. Victoria leaves and Julia calls it a night.

Julia has a dream in which she and Barnabas discuss the success of their plan; later, she hears screaming and Barnabas saying, "Julia, Julia, come to me, I need you!" We are beckoned by Barnabas' voice to the woods, where we find him regretting his choice to go to Blair's home. He then collapses and dies.

Julia: Because he's Nicholas Blair and he isn't human.

Julia: Elizabeth Stoddard is tortured by the presence of death. We can't see it, of course. But if you look into her eyes, you'll know that, somehow, she can see it.

Dark Shadows - Episode 604 on the IMDb 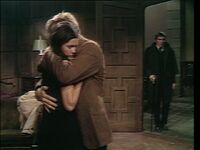 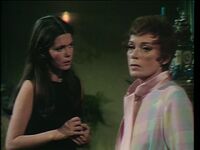 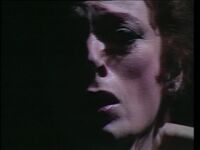 Julia's Nightmare
Add a photo to this gallery
Retrieved from "https://darkshadows.fandom.com/wiki/604?oldid=143846"
Community content is available under CC-BY-SA unless otherwise noted.