Roger's destruction of Elizabeth's model mausoleum sends her racing to the woods where she has an encounter with death.

A quiet, still night, at the great estate of Collinwood, a whispered wind barely stirs the branches of the trees. But that whisper draws a message to one woman, a message that her death draws nearer, and nearer.

Elizabeth admires the new model of her mausoleum; Victoria comes in offering to take her for a drive. Elizabeth wants Victoria to be the first to see the mausoleum, which she doesn't think is perfect yet. She wants to get Victoria's promise that if she dies before its construction is completed, she won’t be buried under the ground.

Victoria refuses to promise her because Elizabeth is not going to die. Victoria states that Elizabeth is in excellent health; Elizabeth refuses to accept their diagnoses because the mind can defeat the body. Victoria reasons that Elizabeth must therefore force herself not to think about death. She also reasons that if this were happening to someone else, Elizabeth would be the first to find help for them. Elizabeth admits she has tried to help herself; she continues to talk about her mausoleum. She asks for Victoria's promise that someone will always be at Collinwood to hear the bell indicating she is alive. Roger comes in and scolds her. Elizabeth attempts to hide her mausoleum model; Roger is outraged that she actually had an architect draw up the plans and accuses the architect of humoring her. Elizabeth points out that Roger might have a better life if he weren't so concerned about what people think. Roger smashes the mausoleum; Elizabeth runs out. Victoria scolds Roger for destroying the model. Roger is upset; he can't figure out what to do about Elizabeth, who can spend hours as her old self before snapping back to her fears, which he is almost on the point of believing.

Elizabeth hears her own voice calling to her, saying it’s almost time for her to go to her grave.

Roger traces everything happening back to his marrying Cassandra (473); Roger laughs that he and Victoria haven't been lucky in love, and is thankful that Vicki didn't marry Jeff Clark, who shows up asking to see Victoria. Roger is protective of Victoria, even offering to lie for her. She agrees to see Jeff.

Elizabeth continues to hear her own voice, prophesying her death. She will be found in her room, tonight, seeming to be dead.

Jeff gives Victoria the engagement ring back and Victoria doesn't want him to touch her. They talk about the events of 576 and all the events swirling around since then. Jeff can’t explain but tries to get her to realize that they love each other. Vicki says that their love doesn't mean they’re right for each other.

Upstairs, Roger finds Elizabeth is missing. Jeff is upset that his plan didn’t work. Roger comes down, reporting that Elizabeth is gone.

Elizabeth wanders through the cemetery. She will be buried in Eagle Hill with her ancestors. Her inner voice torments her, stating that the mausoleum won’t be finished in time. Roger and Jeff go out looking for Elizabeth; Victoria and Mrs Johnson are to search the house. At Peter's grave, Elizabeth remembers the events of 403 and wonders if anyone will ever know of her struggle after being buried alive.

In the woods, Roger calls to Elizabeth while Jeff thinks he hears something. Roger admits Elizabeth's mental aberrations. Roger suspects Elizabeth went to Widows' Hill. Elizabeth struggles at Peter's grave and hears her inner torment again. Jeff shows up, and Elizabeth mistakes him for Peter Bradford. When he touches her, she collapses on Peter’s grave as her inner voice predicted.

At Collinwood, Victoria descends the stairs and Jeff carries Elizabeth home. Elizabeth is very cold and has no pulse or heartbeat that Victoria can detect.

Elizabeth: (to Victoria) We've always understood each other, you and I.

Victoria: (to Elizabeth) You and your family have been kinder to me than anyone else in the world.

Roger (to Victoria): We've always been unlucky in love, you and I.

Dark Shadows - Episode 603 on the IMDb 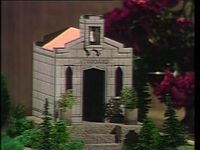 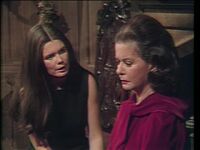 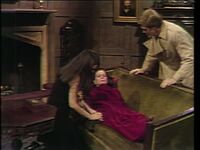 Comatose
Community content is available under CC-BY-SA unless otherwise noted.