Nicholas informs Angelique that she can have Barnabas.

On this cold, clear night one can hear the sound of the ocean at the great house of Collinwood, a sound which means peace to some, but rage and fury to others. And in another house, nearer the sea, the emotion is rage. Rage because one of the many plans conceived there is in danger of being stopped by a violent death.

Nicholas finds Angelique and stops her as she is about to bite Jeff. Nicholas removes the bite marks from Jeff's neck and makes him forget her. Adam, worried about Barnabas' plans, takes Eve down the spiral stairs to the basement of Blair's house (last seen in episode 594) and locks her in a room there. Nicholas informs Angelique that she can have Barnabas.

Adam: This is not a time for you and I to test each other.
Nicholas: May that day never come.
Adam: It will.

Adam: I've heard of your powers many times, now it's hers?!

Nicholas: Nothing is exactly as it appears.

Dark Shadows - Episode 602 on the IMDb 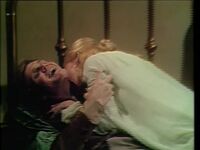 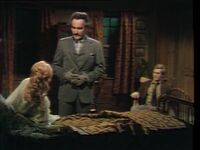 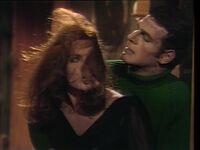