Upon learning that Barnabas plans to kill Eve, Nicholas plans to deal with him once and for all.

The threat of sudden death hangs over the Collins estate once again. A seance held at the Old House this night has unleashed a vengeful spirit, and revealed the whereabouts of a man named Adam, whose life is now in grave danger.

Adam tries to follow Eve but is overcome by a choking sensation. Back at the Old House, Julia and Barnabas discuss the best course of action now that they know Nicholas Blair is involved. A moment later the same choking sensation takes over Barnabas.

At Collinwood, Carolyn asks Harry to go to the Old House, in the hopes that they'll find Adam there. She worries that Barnabas may be the one responsible for Adam's disappearance.

Harry goes to the Old House, and overhears Julia and Barnabas discussing Eve. Harry goes to Nicholas' house by the sea, where he attempts to sell information to Nicholas Blair, for $5,000. Nicholas refuses to pay, and Harry threatens to tell Carolyn where Adam is. He tries to leave, but finds himself powerless, at Nicholas's mercy.

Nicolas uses his powers to tell Harry that he is going to work for him, he may continue to live at Collinwood and work for Carolyn but his first allegiance is to Nicholas. Harry has no choice but to agree to the terms.

Carolyn: We're not going to bargain. You'll do it and I'll pay you what I think it's worth. And that's that.

Nicholas: Knowing someone is planning to kill Eve is worth $100. Knowing who is going to do it is worth a lot more.

Dark Shadows - Episode 601 on the IMDb 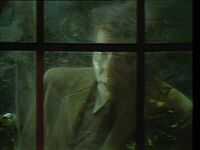 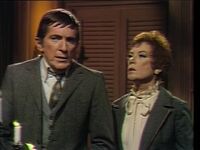 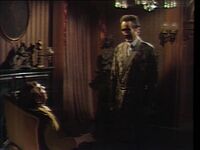 At Nicholas's Mercy
Add a photo to this gallery
Retrieved from "https://darkshadows.fandom.com/wiki/601?oldid=138404"
Community content is available under CC-BY-SA unless otherwise noted.