Eve tells Nicholas that she hates Adam and wants to kill him.

On this night a horrible memory has been mysteriously erased from a young woman's mind and Barnabas Collins no longer lives with the threat of having the past exposed. But the time of terror at the Old House is not yet over. For the present and the future contain greater dangers than were ever known in the past.

Barnabas tells Julia about Maggie's escape from the mausoleum and mysterious memory loss after he and Willie went to visit her at her home. When Julia asks how Maggie escaped and how she had lost her memory. Barnabas reasons that someone made her forget, and only Nicholas Blair could have done this.

Barnabas and Julia continue their conversation. Barnabas reasons that Nicholas must have learned about Maggie from Cassandra and that he erased Maggie's memory in order to help Adam. Julia wonders if Professor Stokes has been successful in locating Adam and Eve. Barnabas hopes that the couple have left Collinsport for good. We switch scenes to discover Adam sitting in Nicholas' drawing room. Nicholas enters and asks Adam why he looks unhappy. Adam says he is wondering about what Prof. Stokes has said concerning Eve, but Nicholas reminds Adam that Prof. Stokes has always opposed the experiment. Adam also asks about Leona Eltridge and Nicholas explains that Leona was terminally ill and saw the experiment as a chance to continue living. Adam mentions the mysterious wind in the Old House after the experiment and Nicholas becomes obviously disturbed, but tells Adam not to worry and concentrate all his attention on making Eve happy. They have not observed Eve eavesdropping in the hallway.

In the drawing room, Eve acts impatient when Adam tries to cozy up to her. She tells Adam she does not like "this place" and Adam tells her Nicholas is planning on taking them away where no one will bother them and they will be happy together. Eve looks pleased until the last pronouncement. When Adam pushes the issue she gets upset and asks him to drop the subject. She suggest he go to bed and tells him she wants to be alone. Adam leaves and Nicholas enters and suggest they have a talk. Eve tells Nicholas she hates Adam, but would find him to be a good match. Nicholas humors her and gets her to say she would kill him, at which point he tells her she is truly evil and he likes that, but that he has no [romantic] interest in her and will "end her existence" if she does not win over Adam.

Prof. Stokes returns to the Old House and tells Barnabas and Julia that Adam is not at Collinwood. He speculates that Adam will not respond to him as long as he suspects that Eve's life force was supplied by Danielle Rogét. At the mention of Danielle's name the doors burst open again and a gust of wind blows out the candelabra. The bookcase opens and a book drops off the shelf. Stokes examines the volume which is "An account of the French Revolution" by Phillippe Cordier published in 1798. Stokes suspects that Phillipe is trying to contact them and suggest a séance.

Stokes, Hoffman, and Barnabas hold a séance and Phillipe Cordier possesses Barnabas. He tells that he was the lover of Danielle Roget and he is angry that she has been taken from him. He tells them that her spirit was there, but now it is in a House by the sea. His spirit vows to avenge Danielle's honor and kill the man who claims he loves her. Stokes tells Barnabas that this proves that Danielle Roget's spirit is Eve's life force. Back at Nicholas' place, Adam apologizes to Eve with Nicholas present. Eve suddenly becomes distressed and the front door burst open. She screams that someone in the house is about to die and runs away. Just then Adam begins to feel himself being choked, which, over in The Old House Barnabas also feels.

Nicholas: (to Eve) If you're going to tear the furniture apart, I can get you something, uhm, much more practical than a letter opener.

Dark Shadows - Episode 600 on the IMDb 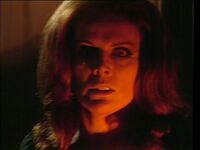 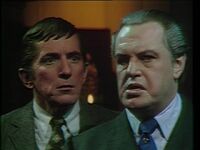 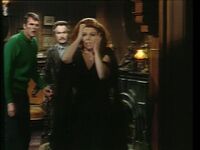 Eve in Distress
Add a photo to this gallery
Retrieved from "https://darkshadows.fandom.com/wiki/600?oldid=138965"
Community content is available under CC-BY-SA unless otherwise noted.