Willie races into the Old House, yelling for Barnabas. He tells him Maggie remembers everything about her abduction, and has now escaped the mausoleum.

Meanwhile, Maggie, weak from her hunger strike, is wandering through the woods. She determines to go to town, to talk to the police. Barnabas and Willie are searching for her also in the woods, and argue about whether David would know how to open the secret room to find Maggie, but remember that David was stuck in the back room and figured it out then. Maggie then changes her mind and decides to head to Joe's for help and guidance.

Joe is looking pretty rough at his apartment, and resolves to resist Angelique when she calls for him. Unfortunately, she comes to him, and they have a long chat about how he cannot resist her. Then she bites him. Unfortunately again, Maggie happens to walk in mid-bite, screams, and passes out.

Joe upbraids Angelique and she leaves. Maggie wakes up and surprises Joe by totally understanding the whole situation. A knock at the door, and Joe opens it despite Maggie's pleas to not answer it...

Willie and Barnabas come back after some fruitless wandering in the woods, and Barnabas decides to just sit around and wait for the police to come. This doesn't seem like the best way to go for Willie, but before they can get too far into the argument, there's another knock at the door, and Joe appears, to tell Barnabas that Maggie wants to talk to him.

They show up at Maggie's door and she greets them pleasantly and gives Barnabas some sketches her Dad did for him. She doesn't appear to have any memory of anything that went on from before Willie initially kidnapped her, and tells Willie he can stop by anytime, since she hasn't seen him for such a long time. They take the drawings and leave, bewildered.

Outside her door, Barnabas decides it can only have been Nicholas who erased Maggie's memory, but they don't know why...

Dark Shadows - Episode 599 on the IMDb 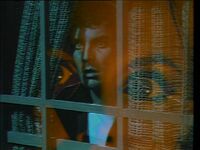 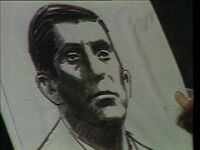 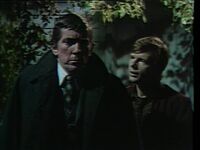 Barnabas & Willie
Add a photo to this gallery
Retrieved from "https://darkshadows.fandom.com/wiki/599?oldid=142127"
Community content is available under CC-BY-SA unless otherwise noted.