A strange life or death experiment has been completed successfully, and the long night of danger for those who live at Collinwood is over. But at least one man believes that the success of the experiment must now be reversed. For he believes that the female creature brought to life in the Old House is evil incarnate.

Professor Stokes searches for Adam. David tells Stokes that he knew Adam was hiding in the West Wing. Carolyn finds them and sends David out while asking Stokes about Adam and his whereabouts. Maggie gives Willie the silent treatment. David sees Willie leaving the Collins Mausoleum, later he opens the secret room and finds Maggie. Willie returns later to find that David has let Maggie go.

Willie: Look, get mad at me, yell at me, do anything you want, call me names, I don't care, but just say something, Maggie!

Dark Shadows - Episode 598 on the IMDb 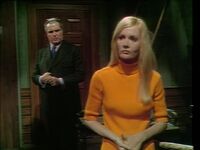 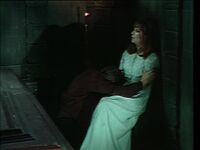 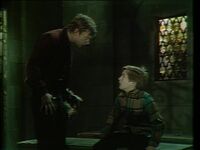 Willie & David
Add a photo to this gallery
Retrieved from "https://darkshadows.fandom.com/wiki/598?oldid=129641"
Community content is available under CC-BY-SA unless otherwise noted.