Eve awakens in the basement of the Old House to the delight of Adam and the astonishment of Julia, but unlike Adam, she can speak and has knowledge, but no memories.

The people who live in the great house of Collinwood rest unaware of the drama which is taking place in another house on the great estate. For an experiment is ending, an experiment which, in a previous attempt, this night, has already caused great suffering. An experiment which if successful this time will provide a mate for one man, and remove his perilous threat to the entire Collins household.

In the basement laboratory of the Old House, Julia announces that the experiment is over, Eve is dead, and they have failed. Then Eve begins to moan and they unwrap the bandages from her face.

Adam bemoans that Eve does not look like Carolyn, and Julia bemoans the death of Leona Eltridge. Barnabas reminds her Leona said she was terminally ill and Adam gets upset that they are wasting energy on the dead when Eve is alive and in need of help. Adam worries something is wrong, but Julia reminds him that Dr. Lang did not expect his reactions. Adam panics when Eve does not instantly respond to outside stimulus and Barnabas finally manages to talk Adam into letting Julia test Eve. Finally Eve begins to moan and awaken, then finally move her hand. She refers to having been asleep and Adam rejoices.

Eve wakes and begins to ask questions, who people are, where she is, and why people are staring at her. Julia explains they were concerned. Eve says she has been on a long journey, from another time and another place, and then she does not know why she said that. Barnabas tries to question her, but Adam gets defensive. Julia asks questions and it becomes obvious to her and Barnabas that she is not like Adam in that she has a previous history. She panics that she does not remember the past or that they do not know anything about her. She panics when Julia tries to give her a shot to calm her down and she gets off the operating table and passes out. Adam puts her back on the table as someone is heard upstairs. Barnabas calls out and hears Professor Stokes answer. Stokes is upset that they have started the experiment and calls Barnabas aside to speak to him in private. Barnabas distracts Adam, who is suspicious of everything, by telling him to take Eve to Josette's room. Stokes tells Barnabas he has information and his evidence is upstairs. Barnabas says he does not particularly care, that she is alive and Adam's and it is no longer his concern. In Josette's room Julia explains Eve passed out because she stood too quickly the first time, but she is fine. She goes to leave and Eve asks Adam to not leave. In the drawing room Stokes has a board with letters he uses to spell the name Leona Eltridge. He rearranges the letters to spell Danielle Roget and says he is surprised Barnabas has never heard of her and begins to tell of her history. Barnabas is upset that Stokes is wasting his time, but Stokes brings up the possibility that Nicholas Blair found out about the experiment and provided the life-force. He postulates that Nicholas conjured up Danielle Rogét from the depths of Hell. Barnabas scoffs at the idea, but Julia expresses concern and tells Stokes they need more proof than an anagram. Stokes advises they not take the chance and destroy Eve tonight.

At her bedside, Adam and Eve talk and get to know each other. She does not seem to mind his face, and delights in his strength. She kisses him long and hard. Downstairs Barnabas and Stokes disagree on the disposition of Eve. Barnabas says he just wants the whole thing to be over and for Adam to take Eve away, when Adam walks in and says that is exactly what he will do once she is rested. Stokes brings up practical matters such as they have no place to stay. Stokes tries to talk to Adam; Stokes says he has a bad feeling about Eve and that his research leads him to believe Eve is evil. They start to argue but Adam does not let him get very far into Danielle Rogét's history when Adam announces that Stokes is “no longer my friend” and refuses to listen to more. In her room, Eve hears sounds and feels a wind blowing through a closed window. She investigates and a door opens and the chandelier rocks. She begins talking to the disturbance in half-French, saying she is alive and will never return.

Eve (first words): I have been asleep so long.

Professor Stokes: (about Danielle Roget) She was the most evil woman the 18th century produced. Completely ammoral. She murdered at least 12 men in her lifetime. She was finally hanged here in America after she had escaped from France.

Eve: (to the spirit causing a disturbance) I remember you. Yes, I do. You have come after me. No. No mon petit. I will not go back with you. I'm alive. I'm alive. I will never come back.

Barnabas: Perhaps I just want to end this all.

Dark Shadows - Episode 596 on the IMDb 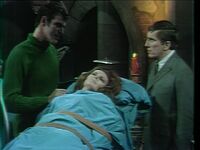 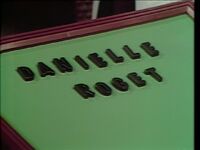 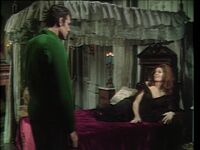 Seduction
Add a photo to this gallery
Retrieved from "https://darkshadows.fandom.com/wiki/596?oldid=129629"
Community content is available under CC-BY-SA unless otherwise noted.