Eve is brought to life.

The great house of Collinwood is shrouded in darkness, and a cold night wind seems to whisper secrets, ominous secrets. In the Old House on the great estate, a frightened man waits not knowing what will happen next. If he knew his fear would mount to terror. For he is about to be confronted by one the living dead.

Leona Eltridge arrives at the Old House to provide the life-force for Adam's mate. Leona tells Adam that she is a friend of Nicholas, but instructs him not to disclose that fact to anyone. She tells Professor Stokes that she was Eric Lang's girlfriend, and therefore knew about his experiment. She then says she has an incurable terminal illness that will cause her to die painfully, so she has no problems with the risk of participating in the experiment.

Stokes goes downstairs and tells the story to Barnabas, who doesn't really care because they have to do the experiment anyway. Stokes gets interested in the spelling of Leona's name, and leaves abruptly.

Back in the laboratory, Julia sets up for the experiment. She says she doesn't believe anything Leona says, but again, Barnabas doesn't care, because they have to go through with it anyway.

Adam and Leona come down and Leona straps in for the procedure. Julia tries to give Leona an injection for the pain, but Leona doesn't want it, and appears to welcome the idea of pain. Adam yells at everyone some more, and then the experiment begins.

After a lot of noise and lights, Leona screams and then goes limp/dead. Adam yells at everyone again for failing, and then Eve begins to moan. Adam uncovers her and starts shrieking "she's alive!"

Professor Stokes: Long stories are often the most interesting ones.

Professor Stokes: (about Leona): There's something curious about that woman.

Dark Shadows - Episode 595 on the IMDb 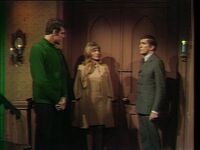 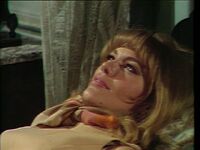 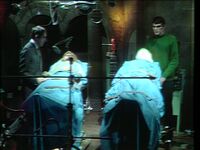 The Experiment
Add a photo to this gallery
Retrieved from "https://darkshadows.fandom.com/wiki/595?oldid=138394"
Community content is available under CC-BY-SA unless otherwise noted.