Carolyn is discovered to be alive, who assists Nicholas in a ritual to summon the spirit of Danielle Roget to be the new life force.

On this night a stillness pervades the great house of Collinwood. An ominous stillness, for unknown to the others, one member of the Collins family is dead. And because of her death, Barnabas Collins has made a terrifying decision. A decision that may result in his own destruction.

Barnabas arrives at Collinwood and tries to figure out what he is going to say to the family. He resolves to tell them the truth and knocks on the door. Then Carolyn opens the door.

Carolyn wonders why Barnabas is stupefied and invites him in. She claims to have merely fainted during the experiment and remembers nothing after that. She’s sorry that the Experiment hasn’t succeeded for Adam’s sake and asks when they will try again. Barnabas is unsure of who brought Carolyn to Collinwood and is reluctant to attempt the experiment again. Outside, Barnabas wonders who helped them because he doesn't believe Julia could have made a mistake. In the West Wing, Adam is happily surprised that Carolyn is alive; Nicholas gloats about his power and states that he will provide the life-force for the second experiment. He promises Adam his new mate will be even more beautiful than Carolyn and he will grow to love her even more. He agrees to bring Carolyn to Adam so they can say goodbye.

Carolyn offers to go through the experiment again, but Adam refuses because it is too dangerous and he is so grateful that she is fine. Carolyn wants to feel as though she’s helped Adam. Adam tells her that he will leave after the Experiment is over. She realizes he is in danger and says she’ll miss him. He begs her not to forget him, which she vows not to do. He holds and kisses her, then says goodbye. Adam shows up at The Old House, declaring that they will complete the experiment tonight without Carolyn. He says he will find the woman for the life-force and that Barnabas should only concern himself with finding Julia. At Collinwood, Carolyn laments her being unable to help Adam; Nicholas says she can help by performing a ceremony to revive a 200-years-dead woman.

Nicholas takes Carolyn down a spiral staircase, deep into the basement of his house by the sea. He seats her at a table surrounded by a circle which she can’t leave or she will die at the hands of the woman he’s about to summon, one Danielle Rogét. Nicholas tells Carolyn that Danielle lived during the French Revolution, which she survived and came to America where she died. Rogét "enjoys the spectacle of death", having sentenced seven people to die at the guillotine, including two members of her own family. Nicholas tries to half-explain to Carolyn, but promises that he won’t let anything happen to her as long as she stays within the circle drawn on the floor. He gives her an incantation to read. Danielle laughs, and then screams, in order to frighten Carolyn, which Nicholas says she mustn’t allow. Carolyn freaks out and tries to run away, but Nicholas calms her and sits her back down, where she faints. Rogét appears, demanding answers to why she’s been summoned not to kill someone since that is why he has always summoned her before. Nicholas asks her if she would like to live again, which she says is not possible. He tells her she can if she appears to him at 3, in the flesh as she was in life, a form in which she can appear for only a few hours. She begs to destroy Carolyn, but he refuses and sends her back to her grave. At 2:45 Nicholas and Carolyn enter Collinwood's foyer through the front door, where he hypnotizes her to forget the ritual and the Experiment and to believe he came to see Roger. When she snaps into reality, she says Roger is out and Nicholas kisses her hand and leaves. At the Old House around 3 a.m., Barnabas can’t find Julia and isn’t sure how they could find a woman on such short notice. There’s a knock on the door. A woman is there saying Adam asked her to come. She introduces herself as Leona Eltridge and Adam gruffly says she will be the new life-force for the Experiment.

Nicholas: I have special powers.

Adam: Carolyn, please think of me sometimes. Try not to forget me.
Carolyn: I won't have to try, I'll always remember you. Always.

Dark Shadows - Episode 594 on the IMDb 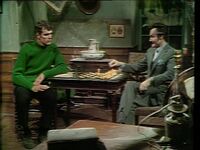 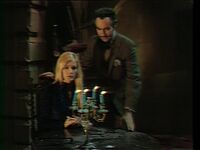 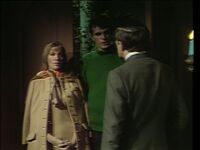 Leona Eltridge
Add a photo to this gallery
Retrieved from "https://darkshadows.fandom.com/wiki/594?oldid=138385"
Community content is available under CC-BY-SA unless otherwise noted.