Time passes at Collinwood and life goes on, but only from moment to moment, its fate depended on the frightening game of life or death being played out in Old House on the Collins estate. There on this night, a bizarre experiment is about to be performed.

Julia isn't sure why Carolyn's Life-Force isn't working within the Mate; Adam begins staunch inquiries. Julia attempts to revive Carolyn; despite everything. Barnabas delivers the sad news that they have failed in the Experiment and Carolyn is in danger. Adam accuses Julia of attempting to murder Carolyn. Adam decides against medical advice to carry Carolyn upstairs. He has decided that he can be Carolyn’s protector. Julia remarks after Adam has left that Adam showed no concern for the mate; she is unable to tell Barnabas that Carolyn will be alright and admits that there’s a possibility she will die. She gives slim odds and says there’s nothing more she can do; Barnabas worries about the bloodbath that will ensue if Carolyn dies.

Adam sets Carolyn on Josette's bed. They chat about the experiment and he says he doesn’t care about it as long as Carolyn is okay. Carolyn feels a sharp pain that becomes dull; she relates the experience of being in a cold empty room where no one could hear her screams. The room’s walls then cracked, fell down, and disappeared; a thick fog covered everything outside, as she narrates, scenes of the covered mate, Old Model Barnabas, wax hands, and SOAS scroll by. She relates seeing disconnected dead things coming toward her, wanting something, her life, from her. Adam attempts to reassure her that he won’t let the dead things get her; she feels the pain again and says it’s all over. She attempts to move and he declares he wants only her. She becomes cold and dies. Julia comes in and Adam tells of the talk he had with her; he weeps. Julia examines her and declares her dead. Adam goes out, presumably to start his murderous rampage.

Adam goes to the lab, where he announces Carolyn's death and accuses Barnabas of murdering her. He promises that Barnabas will pay. Barnabas says he feels more pain because Carolyn is his family; Adam promises to start killing people as he promised. He knocks Barnabas unconscious.

Upstairs, Julia has descended the steps and Adam breezes by her. Barnabas comes upstairs, limping, and says they must find a way to stop Adam. Barnabas is steadfast in his desire to go to Collinwood; he and Julia quibble about who shall go. She offers him some medication before his trip; she has to go upstairs to get them.

Upstairs, Julia's medical bag is alone because Carolyn has vanished.

Adam: Carolyn, I don't care about anyone else, as long as you're alive I'm happy.

Dark Shadows - Episode 592 on the IMDb

Dark Shadows Everyday - Episode 592 - And The Walls Fell Down 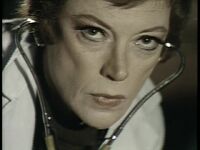 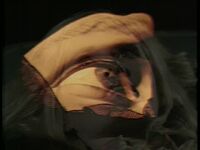 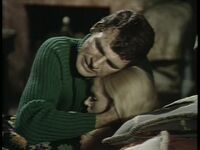