Joe interrogates Willie about Adam, however Willie chases him off with a gun.

Night over Collinwood, and two conspirators must find a missing portrait. A portrait which will tell whether or not the witch has died. And while one searches her room, another waits below for the answer.

Roger is still worried over Cassandra's disappearance, but admits to Julia that there were several things about her he couldn't explain. He reveals that she locked up the portrait of Angelique in a closet so no one could see it. Julia is amazed to discover that the picture has faded greatly, and the portrait can only barely be made out. Just then a visitor arrives, who introduces himself as Nicholas Blair, Cassandra's brother.

Barnabas and Julia are immediately skeptical of the strange man, even more so when he claims to have arrived from Martinique. Roger informs Nicholas of Cassandra's disappearance and is greatly disturbed by his nonchalant attitude. Nicholas informs them all that she normally walks away from conflict, and is confident that she will return shortly.

Willie is worried about Adam still being on the loose, but Barnabas tells him to stay out of it. Joe Haskell appears and questions Willie about Adam. The two men struggle and Joe leaves without gaining any new information. Nicholas gets the portrait under the pretense of being an art restorer. He attempts to communicate with Angelique through her picture, which leads him to the Old House. Meanwhile, Willie is given the chore of rebuilding the wall which hides the skeleton of Reverand Trask. Nicholas interrupts his work when he arrives at the Old House, looking for Barnabas. He hypnotizes Willie to tell him all he knows. Willie tells him that Cassandra is a witch and there's a skeleton in the basement. Nicholas goes to the basement where he addresses Trask's bones by name.

Nicholas: Cassandra is not well liked by many women.

Nicholas: (about Cassandra) This has happened before. She has felt hostility and she has reacted in a typically feminine way.

Dark Shadows - Episode 522 on the IMDb 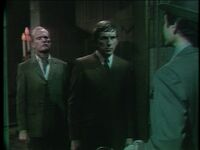 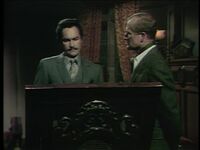 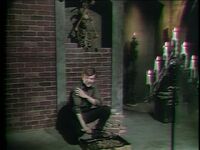 Willie's Soliloquy
Add a photo to this gallery
Retrieved from "https://darkshadows.fandom.com/wiki/522?oldid=141767"
Community content is available under CC-BY-SA unless otherwise noted.