Daphne, determined to prevent the return of Gerard, sends Tad and Carrie away.

A night of horror on the great estate of Collinwood. For two possessed children, at the bidding of an evil ghost, have performed a ceremony that has brought their dead governess alive. And now the three of them stage the ceremony again, this time to bring Gerard Stiles into the land of the living.

Daphne, Tad and Carrie perform the ceremony again to bring Gerard back to life. As the ceremony nears its conclusion, Tad yells, "he is coming!"

The children want to go downstairs to greet Gerard, but Daphne says the ceremony is not yet complete and they must continue to concentrate. Moments later, there is a knock at the door and Willie demands to be let in. Daphne hides while Tad and Carrie try to hide the fact they were having a ceremony, but Willie manages to get into the room anyway. Willie knows they are possessed and takes the children out of the room with him. Once they're gone, Daphne emerges from hiding and wonders where Gerard is.

Willie takes Tad and Carrie to the drawing room to wait for Barnabas, but they soon hear the howling of the dogs. A door in the foyer opens and Willie is distracted by Maggie staggering down the stairs. Willie closes the doors to the drawing room and takes Maggie back upstairs. Meanwhile, the children wonder if Daphne is still upstairs and where Gerard might be. Carrie suddenly senses his presence and Gerard appears.

Upstairs, Maggie continues to be summoned by the vampire, but Willie watches over her. He pleads with Maggie to tell him who the vampire is.

The next morning, Tad and Carrie (posing as David and Hallie) rush into Maggie's room and inform her that Quentin and Julia want to send them to Windcliff Sanitarium. Maggie agrees to talk to Quentin and Julia about it later, but Willie walks in and kicks the children out. Willie tells Maggie that the children are possessed.

The children arrive at David's room and discover a packed suitcase is laying on the bed. They assume that Daphne wants them to stay at Rose Cottage with her. The children fear that Gerard will be angry if they leave Collinwood.

Back in Maggie's room, Willie explains that David goes by Tad and Hallie is now Carrie. Maggie has trouble comprehending everything, but feels like it's her fault.

Meanwhile, Tad and Carrie sneak out of Collinwood and head to Rose Cottage.

Daphne paces around Rose Cottage and thinks about Quentin. She hopes in her new life there will be a way for them to be together again. Just then, Gerard appears and grabs her from behind. He takes a picture of Quentin and smashes it and attempts to strangle Daphne. She reminds him that he once loved her, and he lets go and disappears. Daphne fears that Gerard is going to destroy Quentin, and she decides she must not let Gerard come back to life. Moments later, Tad and Carrie come rushing in and Daphne tells them that they must get away from Collinwood as soon as they can. She ushers them out of the house. Now by herself again, Daphne calls out for Gerard, saying that without the children, they don't have to worry about Barnabas and Julia and it will be easier for them to be together again.

At Collinwood, Gerard appears in the playroom and sets the dollhouse on fire. At the exact same time, Daphne is surrounded by flames in the real Rose Cottage. 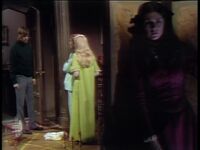 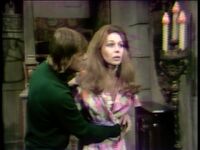 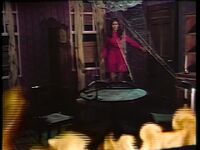 Burning Down the House
Add a photo to this gallery
Retrieved from "https://darkshadows.fandom.com/wiki/1100?oldid=142258"
Community content is available under CC-BY-SA unless otherwise noted.