Tad and Carrie welcome Daphne, brought to life by a ceremony.

The most crucial night in the history of Collinwood. For Carolyn has sung her song, and Barnabas and Julia are desperate since this is another clue of the mysterious disaster that threatens the great house. At the same time, in David's room, two possessed children take another step toward their own doom. They stage a ceremony which will bring one of the two ghosts alive: either Gerard or Daphne. The children know not which. And now, the ceremony over, the children come downstairs, waiting for Gerard or Daphne to appear.

The children walk downstairs after the ceremony, waiting for someone to appear. Moments later, there is a knock at the door and Tad goes to answer it. He opens the door and Daphne appears.

Daphne walks into the foyer, but is very confused and disoriented. She tries to speak, but struggles to put a sentence together. She sits down in the drawing room and tells the children that no one must know she is alive. The children tell her they will do their best to keep her hidden. Daphne tells them that they need to bring back Gerard as well. The three of them hear someone enter the front door, and Daphne hides behind the curtains. Willie walks in and immediately senses they are up to something. Tad, posing as David, tries to get rid of him, but Willie says he isn't leaving until they tell him the truth.

Back in the drawing room, Willie finally agrees to let the children go, but he lets them know that he is going to tell Barnabas about their strange behavior. Tad buys a little time and promises Daphne he will return for her. Daphne emerges from behind the curtain, but is nearly caught by Quentin and Carolyn and returns to her hiding spot. Carolyn senses the stranger has been in the drawing room recently. Quentin suddenly smells lilacs and decides to leave the room. After they leave, Daphne comes back out and calls out for Gerard. She promises she will bring him back tonight.

Quentin returns to the drawing room once Carolyn is gone and calls for Daphne, but she hides behind a cabinet before he sees her. Daphne starts to weep at the kind words he says about her and finally reveals herself to him. The two share a hug, but she pulls away from him and tells him they can't be together. She finally gives in and they kiss passionately. Quentin asks her why she has returned to life, but they are interrupted by Willie from the top of the stairs in the foyer. He confronts Quentin in the foyer and demands to know who he has been talking to.

Quentin denies to Willie he was talking to anyone and tells him to get back to the Old House. Willie finally leaves and Quentin returns to the drawing room. He begs Daphne to end the possession of the children, but Daphne tells them now that she is human again, she has no powers. Quentin is confused as to why she has come back, but she only wants to see the children and leaves.

Meanwhile, Carrie returns with clothes for Daphne to wear. Daphne implies to the children they must bring Gerard back to life.

Back in the drawing room, Carolyn tells Quentin that terrible things are happening at Collinwood right now, but he denies knowing anything and leaves. Carolyn calls out for Gerard and tells him she knows he is nearby.

Upstairs, Carrie begs Daphne not to bring Gerard back, but she says it will be better for everyone if he's alive and promises "it won't be like it was before." The ceremony begins and Tad yells, "he is coming!"

Quentin: (to Daphne) Then I won't ask any questions. But why can't I hold you?

Willie: You know there's enough weird stuff going on in this house here without you two spookin' around.

Quentin (looking for the intruder behind the curtains): Search behind the draperies?
Carolyn: No one would hide there. It's much too obvious.

Dark Shadows Every Day - Episode 1099 - Damsel of the Damned 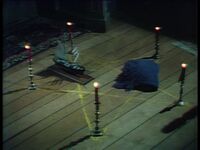 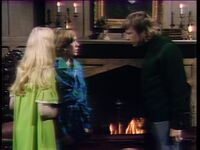 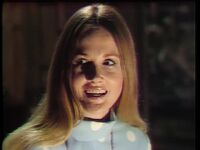 Possession
Community content is available under CC-BY-SA unless otherwise noted.