The possessed children pretend innocence until Barnabas hears them refer to Carolyn as Leticia.

Collinwood in the present time. Only Barnabas Collins and Julia Hoffman know that a terrible catastrophe will befall the great house unless they can prevent it. An important clue is Rose Cottage, and only David and Hallie know that Rose Cottage is a dollhouse that is also a replica of an old, abandoned mansion. On this night, the two children have been lured by spirits from the past to a room in the mansion where a strange ceremony is about to take place. A ceremony which will bring Collinwood one step closer to total disaster.

The ceremony concludes and Tad and Carrie come back to life. They plan to replace David and Hallie at Collinwood and pose as them. They search for Gerard and Daphne, but they are nowhere to be found. Tad warns Carrie that they must get used to the lifestyle of 1970 so as to not draw any suspicion. They need to adjust to their new clothes and the way they talk.

Barnabas returns to Collinwood after searching all over the grounds and failing to find David and Hallie. Julia is convinced they are at Rose Cottage, even though she has no idea where it is. She wonders if it's a house nearby that is no longer referred to as Rose Cottage, but was in 1840.

Meanwhile, Quentin shows up at Rose Cottage, but the children are missing. He pulls out the drawing he took from Daphne's room and wonders what it means, and why she left it for him.

At Collinwood, frustrations continue to grow as Barnabas and Julia fail to learn anything about Rose Cottage. Carolyn walks in and Barnabas informs her the children are missing, but Carolyn doesn't seem the least bit concerned. Julia asks why, but she only says "they're gone." She excuses herself, much to Barnabas and Julia's confusion. Julia decides to look through Elizabeth's horoscope, which reads "the night will end in peace," but Barnabas doubts that will happen. Barnabas suggests searching the West Wing to see if the children are hiding there. After Barnabas leaves, Quentin returns and Julia accuses him of "letting" Hallie go, and shows him the handkerchief that Daphne left in the drawing room.

After arguing for a few moments, Quentin still denies that he saw Daphne when Hallie escaped.

Upstairs, Barnabas enters the West Wing, but only finds the linen closet instead of the playroom. He catches Carolyn wandering around the hallway in a daze, and quickly discovers she is possessed by Leticia. She tells him the children are in bed and that he should stop worrying. She runs off and Barnabas is very perplexed.

In the drawing room, Quentin calls for Daphne and warns her that she better not harm the children. He begins to drink heavily.

Back upstairs, Barnabas enters David's room and finds him in bed and asleep.

Julia returns to the drawing room and informs Quentin that the children are back in the house, and Barnabas is with them now.

In David's room, Barnabas asks many questions about their whereabouts and if they have seen Gerard and Daphne. The children carefully answer their questions and are able to hide the fact they are really Tad and Carrie. Carolyn eventually barges in and Barnabas excuses himself, but not before he tells them they will still be taken away from the house. After he leaves, he hears the children refer to Carolyn as Leticia, while she calls them Tad and Carrie. Barnabas runs back into the room and realizes the children are possessed.

Julia: Carolyn, we believe that some, they’re in some terrible danger, the children!

Barnabas: I know, but we found it in eighteen — nineteen-ninety-nine! And we found the ghosts of — David and Hallie there, in that time.

Dark Shadows Every Day - Episode 1097 - Dawn of the Honey Badger 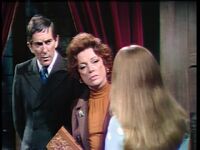 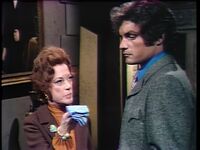 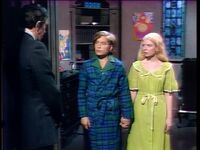 Tad & Carrie
Add a photo to this gallery
Retrieved from "https://darkshadows.fandom.com/wiki/1097?oldid=142255"
Community content is available under CC-BY-SA unless otherwise noted.