Gerard and Daphne lead David and Hallie to Rose Cottage, where they become possessed.

The great house at Collinwood as it looks in the present time. By way of a strange experience in the future, in the year 1995, Barnabas Collins and Julia Hoffman learned that a terrible catastrophe occurred at Collinwood in this year of 1970. They have tried desperately to find a way to avert that tragedy. They know that the two people in the greatest danger are the children, David and Hallie, both of whom have been in contact with the evil spirits within the house. On this night, David Collins has answered the summons of one of these spirits, and has slipped out of the house. Terrified but unable to resist, David moves closer and closer toward the greatest danger he has ever known.

David walks through the woods, pleading with Gerard to let him go back to Collinwood. Gerard appears in front of him and stares menacingly at him.

David agrees to follow Gerard, but doesn't know where they are going, nor why Hallie isn't with them.

At Collinwood, Julia asks Hallie where David is, but Hallie claims she doesn't know. Julia believes her, but won't let her go back to her room. She finally calls Hallie out on having been in contact with Gerard and Daphne, however Hallie says she hasn't seen any ghosts in the house. Julia realizes that she said "ghosts," and Julia hadn't said anything about ghosts and now knows Hallie is lying. Hallie looks out the window and sees Daphne in the distance. Julia looks out the window as well, but Daphne disappears and Hallie tries to flee from the house, but she is caught by Julia and again asks where Gerard and Daphne want the children to go, as Quentin watches from upstairs.

Meanwhile in the West Wing, Daphne is in her room and pulls out a drawing of Rose Cottage in her desk, but is interrupted by Quentin.

Quentin tells Daphne that David is missing and demands to know where he is. She doesn't speak and disappears in front of his eyes. Before he leaves, however, Quentin finds the drawing of Rose Cottage and wonders what it is. He takes it with him.

Gerard and David are still walking through the woods and they finally reach their destination: the real Rose Cottage.

Julia phones Stokes from Collinwood and informs him that David is missing and she believes Gerard has taken him, and the spirits want to take Hallie as well. Julia goes upstairs to collect Hallie's things while Quentin takes Hallie into the drawing room. Daphne appears and distracts Quentin while Hallie escapes from Collinwood.

In the woods, Daphne leads Hallie to Rose Cottage.

Back at Collinwood, Julia yells at Quentin for losing Hallie. Quentin tells Julia he felt a presence and was distracted. He leaves to go search for her and David. Once Quentin leaves, Julia finds a handkerchief on the ground that smells like lilacs.

Gerard lets David rest at Rose Cottage, while Daphne and Hallie approach from the outside. David starts to dream and finds himself with Hallie in the kitchen of Rose Cottage. They notice the dolls are crying and hear them speaking. The dolls tell each other that they are "going to die so they can live again." They try to flee the room, but are stopped by Daphne who is holding her arms out. David wakes up and sees Daphne with her arms extended.

David tells Hallie they need to escape Rose Cottage, but Hallie says it's too late to run and they must do what Gerard and Daphne want them to do. Gerard shows up and David agrees to follow his orders.

In the woods, Quentin is still searching for the children with no luck. He pulls out the drawing of Rose Cottage he took from Daphne's room and remembers it is an old mansion he knew from his mortal lifetime. He wonders if the children have been taken there, and decides to investigate.

Gerard and Daphne lead the children into the dining area of Rose Cottage, which is the same room the dolls were in from the dollhouse in the playroom. They notice the dolls are missing, and Daphne seats the children at the table. Gerard touches the hands of David and Hallie and leaves the room with Daphne. Hallie still thinks there is time to escape, but David says there's no hope anymore. The ghosts of Tad and Carrie appear at the table. David says "Goodbye David" and Hallie says "Goodbye Hallie," and the ghosts sit in their chairs and take their places.

Dark Shadows Every Day - Episode 1096 - Rose Cottage Was the Sled 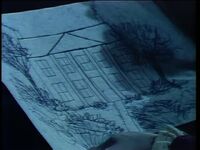 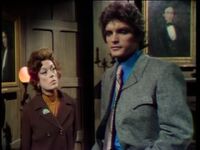 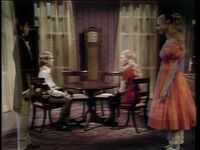