David and Hallie put a doll representing Barnabas in the dollhouse, but it is destroyed.

Terror slowly builds on the great estate of Collinwood. For the children, knowing their fate is to end in Rose Cottage, make a doll of someone who will join them. It is Carolyn who enters the playroom, meets Gerard, and begins to live on two levels. One in the present, and the other in the past she herself never knew. And this night, she prepares the surprise which she has promised.

Carolyn, possessed by Leticia Faye, gives a concert in the drawing room. Julia rushes in and begs her to stop, but it's too late and Carolyn finishes her song. Julia leaves to go check on the children. Carolyn starts singing again, but she faints.

Julia returns to the drawing room and Carolyn soon revives. She feels very weak, but wonders why Julia didn't like her song. Julia points out that Carolyn singing a song was the fourth event that led to the destruction of Collinwood, but Carolyn thinks her clues are bogus and everything will be fine.

Julia goes upstairs to check on the children. The two pretend to be doing school work and claim to know nothing about the song Carolyn was singing, even though they were eavesdropping. Julia decides to leave, and Hallie still wishes they could tell someone about what is happening. David, however, has a plan.

At the Old House, Barnabas rises from his coffin and goes upstairs. Julia rushes in and informs him that Carolyn sang her song.

Julia tells Barnabas she feels that Carolyn is possessed because she now claims she has a second sight and has interacted with Gerard. Barnabas recalls Pansy Faye from 1897 and notes that she sang the same song as Carolyn did, but Julia doesn't think Pansy could have lived in both 1840 and 1897, because she was still young at the turn of the century. Barnabas feels Gerard has inadvertently given them a clue, and the two head back to Collinwood.

At Collinwood, Barnabas arrives to check on Carolyn and asks her questions about the song she sang. Carolyn claims she read the song in a book, but has never heard of anyone named Pansy Faye. Barnabas challenges Carolyn to use her second sight to see into the past and discover how she learned her song. Carolyn then has a vision where she can see the playroom, but the vision ends and she falls into a state of confusion. Julia asks her to take them to the playroom, but Carolyn thinks they are crazy because there is no playroom at Collinwood and breaks down. Barnabas decides they need to get the children out of the house immediately.

In David's room, David has created a doll of Barnabas and plans to put it in Rose Cottage, and hopefully he will be able to help them. Hallie isn't sure his plan will work, but decides it is worth a try.

Later that night, Julia puts Carolyn to bed and Elizabeth tells her and Barnabas they need to leave Carolyn alone. Barnabas wants to take David and Hallie to Stokes' house, but she refuses to allow it.

Meanwhile, the children enter the playroom and place the doll of Barnabas inside Rose Cottage.

Everyone convenes in David's room and Barnabas and Julia sense Gerard is somewhere in the house. The children do not feel anything, but Elizabeth is evasive. Barnabas makes up his mind and tells Elizabeth he is taking the children out of the house whether she likes it or not.

The children go back to the playroom and discover the doll of Barnabas has been taken apart and thrown on the floor.

Barnabas goes to search for David, but he isn't in his room. Meanwhile, David goes downstairs and walks out of the house in a trance. He calls for Gerard.

Hallie: David, sometimes you scare me.

Barnabas: Elizabeth, all the children and everyone in this house, their lives hang in the balance. Are you willing to risk them?

David (finding Elizabeth, Barnabas and Julia in his room): What is this? A convention?

David: Carolyn singing? She must have flipped out. 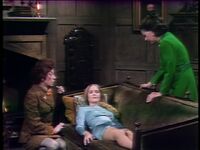 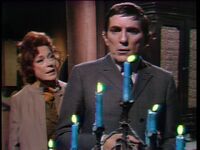 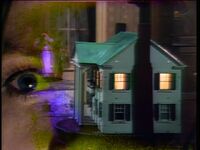