Carolyn comes under the spell of Gerard and becomes Leticia Faye.

The great estate of Collinwood in present time. A house besieged by secret treachery. For two children have come under the evil influence of a vengeful ghost, and they know they are destined to enter an unknown world. A world symbolized by a doll's house called Rose Cottage. They also know they are destined to have company there, and so under Gerard's guidance they make a doll, a doll named Leticia. And they place it in Rose Cottage, knowing that whoever Leticia is, she will be drawn to their secret room.

Carolyn is able to enter the playroom and wonders why she is there. She recognizes the carousel music as the tune she was humming earlier. Carolyn wonders to herself who called her to the playroom and Gerard appears behind her.

Carolyn sees Gerard and tries to escape, but the door is locked and Gerard grabs her. He softly touches her head and takes her under his power. Carolyn excitedly looks inside Rose Cottage and sees the new doll and remembers that she is Leticia.

In the drawing room, Julia is looking for Carolyn, but Elizabeth hasn't seen her. Elizabeth is reading a new book about astrology and rambles on about how she believes Sebastian's horoscope more than her and Barnabas' claims that a disaster is coming. Elizabeth singles out the last clue of Carolyn singing a song, and assures Julia that Carolyn cannot sing.

In the playroom, Carolyn thanks Gerard for helping her remember the past and leaves the room.

Julia reads through Quentin's 1840 journal and reads how there was a concert at Collinwood. Carolyn comes rushing in, still excited from her encounter with Gerard. She is looking for something, but can't find it and quickly leaves, much to the surprise of Elizabeth and Julia.

Carolyn runs to an abandoned room that appears to have not been in use for many years and opens a trunk. She finds many old-fashioned clothes and excitedly tries them on. Elizabeth catches her and wonders why she is looking through the old trunks. Carolyn assures her she isn't doing anything wrong and Elizabeth agrees to leave her alone. After she leaves, Carolyn finds a stack of papers and realizes it's "Gerard's surprise."

The next morning, Sebastian arrives at Collinwood and wants to see Maggie, but Julia tells him she had a restless night and is not taking any visitors. Sebastian pleads with Julia to see her, and Julia goes to check with Maggie to see if it's all right. Sebastian goes into the drawing room; Carolyn spots him and breaks down when he looks at her.

Carolyn apologizes, but says it's not because of his resemblance to Jeb, but because he seems so sad and despondent. Sebastian is surprised by her claim, but Carolyn says she feels that she has a second sight. Julia returns and tells Sebastian that Elizabeth wants to see him upstairs. Once he's gone, Julia confronts Carolyn about the "second sight" that she has suddenly developed. She gets upset with Julia's questions and runs out in anger.

Later, Sebastian begs Elizabeth to let him see Maggie, but she tells him that she is simply too weak to see anyone. After Elizabeth leaves him to go get her horoscope, Carolyn returns and asks Sebastian why he doesn't tell Elizabeth that he lied on her horoscope.

Sebastian nervously tells Carolyn the horoscope is true, but Carolyn calmly tells him he needs to stop lying. The two argue before Elizabeth finally returns, and Sebastian runs out of the house. Carolyn goes into the drawing room and says she needs to get ready for her "surprise." Elizabeth is confused by her erratic behavior, but Carolyn warns her not to ruin her surprise. She wonders where everyone is and runs to the foyer, where she sees Gerard. Carolyn calmly returns to the drawing room and tells Elizabeth she is about to give a concert. As she starts to sing, Julia hears her from the top of the stairs and runs into the drawing room, begging Carolyn to stop.

Julia: Anything that happens strange in this house is my business now.

Carolyn (to Elizabeth): Everyone in this house is always looking for something. Julia and Barnabas prowl in and out of rooms. You don't follow them around. [They] find books and diaries....Why can't I be allowed to help? 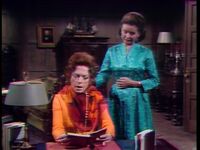 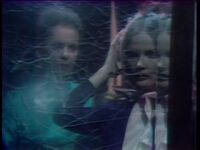 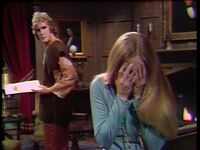 Carolyn in Distress
Community content is available under CC-BY-SA unless otherwise noted.