David and Hallie make a doll and realize that someone will live with them in the dollhouse.

Collinwood in present time. A house filled with mystery and intrigue. For though Barnabas Collins tries to stop the disaster he knows is to happen, two children have discovered a secret world. A world populated by the dead. And this night, they learn...

Carrie summons David and Hallie back to the playroom and beckons them to look inside Rose Cottage. Hallie notices that they are now inside the dollhouse, in place of the dolls.

Hallie runs away from the dollhouse and wonders what it all means. David figures that Gerard is going to trap them inside the dollhouse forever. Hallie hopes Barnabas and Julia will find out what is happening. The carousel starts playing and David calms down, and thinks maybe they will like it in Rose Cottage. In the hallway, Carolyn hears the sound of the carousel and opens the door to the playroom, but instead only finds the linen closet. When Carolyn's back is turned, David sneaks out of the playroom and pretends to not hear the music. He claims he is looking for Hallie as well, and Carolyn yells at him for being in the West Wing.

Carolyn takes David back to the drawing room and Hallie soon joins them. Carolyn leaves, and Hallie tells David she feels much better after having listened to the carousel. She informs them that tomorrow they must do something "very special and important."

The next morning, Hallie gives David instructions from Gerard and leaves. Gerard apparently wants David to make a doll. Hallie returns moments later with fabric for the new doll. David asks several questions, but Hallie only replies that "it has to be done."

Meanwhile, Carolyn is keeping watch over Maggie, who asks Carolyn to close the drapes to keep the sun out.

Now working in the drawing room, Hallie finally admits to David that the new doll is someone who is going to live with them in Rose Cottage. Before she can continue, there is a knock at the door. Sebastian arrives and asks to see Maggie. David informs him that she is sick, but Hallie runs upstairs to let her know. Sebastian tells David that he can't draw his horoscope. David is sad and leaves, but Carolyn walks down the stairs. She tells Sebastian that Maggie was bitten by an animal, which has Sebastian very curious.

The children return to Hallie's room. David still has many questions, but Hallie tells him he will know everything very soon.

Carolyn updates Sebastian about Maggie's condition and the treatment Julia is giving her. Sebastian still wants to see Maggie, but Carolyn says she isn't in the right state of mind and asks him to leave.

In Hallie's room, David completes the new doll and Hallie is very excited about it, and it even looks "just like her." David asks who the doll is, and Hallie says her name is Leticia, although she isn't quite sure who Leticia is. Hallie says they must get to the playroom immediately.

The children arrive at the playroom and David puts the new doll in Rose Cottage.

At dusk, Maggie hears the dogs howling as Carolyn watches over her. Maggie wants to leave, but Carolyn forces her to stay. As Carolyn fixes Maggie's bed, she begins humming the tune from the playroom.

David and Hallie return to Hallie's room. David isn't so sure that making the doll was a good idea, but Hallie insists this is what Gerard wanted.

Meanwhile, Maggie looks outside as Carolyn continues to hum the playroom tune. She leaves Maggie's room and goes to the West Wing, where she is able to enter the playroom.

Carolyn: Remember, remember about a year ago there were attacks like this. How odd it is. 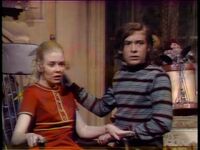 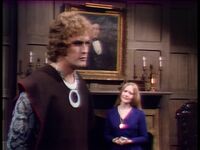 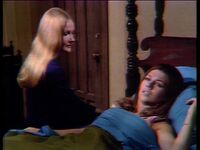 Looking after Maggie
Add a photo to this gallery
Retrieved from "https://darkshadows.fandom.com/wiki/1093?oldid=142251"
Community content is available under CC-BY-SA unless otherwise noted.