The dolls disappear from the doll house and David and Hallie see themselves in place of the dolls.

Collinwood in present time. A new threat. A new mystery. For Maggie Evans has been bitten by a vampire. A vampire who was not Barnabas Collins. Julia and Barnabas are in panic over who this vampire may be, and this night, when Maggie feels the summons, Julia decides to let her answer it, so they may discover the vampire's identity.

Julia, with a cross in hand, follows Maggie to the vampire.

Maggie wanders through the woods with Julia close behind, but her cover is blown when she steps on a branch and tries to hide.

Meanwhile, David finally finds Hallie at Collinwood. Hallie is reading Elizabeth's horoscope, which for the day reads "loved ones will finally find their way home." She isn't sure if she wants to know what the horoscope means, and decides she no longer cares what Gerard does to her.

In the woods, Julia loses track of Maggie, but finds Barnabas. Barnabas hasn't seen Maggie and sends Julia back to Collinwood, while he continues to search.

At Collinwood, David hears the voice of Carrie summoning him and tells Hallie they have to go to the playroom. Julia's return delays them, but she agrees to let them go upstairs, thinking they are going to bed.

Barnabas finds Maggie in the woods, with fresh bite marks on her neck.

Barnabas returns to Collinwood with Maggie and he and Julia take her up to her room.

The children go to the playroom, but no one is there. Eventually the carousel begins playing and David senses someone is in the room.

In Maggie's room, Julia tells Barnabas that Maggie needs a blood transfusion or else she may die and rise as a vampire. Julia decides to go into town to get supplies. After she leaves, Maggie revives and Barnabas tries to get her to talk, but she is able to resist his hypnosis.

Back in the playroom, David and Hallie notice that the lights in Rose Cottage have turned on.

David looks inside the dollhouse, but can't figure out how the light goes on. He decides to wait in the playroom for Carrie.

Julia gives Maggie a transfusion and her condition appears to be improving. As Maggie rests, Julia and Barnabas wonder what to tell the family in regards to Maggie. They decide to try and keep it a secret from everyone else so the police don't get involved. Julia also wonders if the attack on Maggie has anything to do with the impending disaster.

In the playroom, Hallie feels there is someone in the room and she is led to the dollhouse. She and David look inside and find the model ship next to the dolls.

Hallie suggests destroying the dollhouse, but David doesn't think that will work since they already tried to destroy the dolls. The decide to continue to wait for one of the spirits to show up.

Meanwhile, Barnabas and Julia continue to watch over Maggie as Julia reads the journal of the Quentin from the 1840s. She finds an entry from October 14, 1839 which reads: "Tonight I do what I dread. I must go and see 'G' at the cottage." The two assume that "G" means Gerard and he lived at Rose Cottage. As the dogs continue to howl outside, Julia continues to try to find out clues about Rose Cottage.

In the playroom, David finally decides it's time to leave. As they walk out, Hallie notices the dolls inside Rose Cottage have disappeared. When they enter the hallway, Carrie summons them back to the playroom. They look inside the dollhouse and now see themselves instead of the dolls.

David: (to Hallie) A visitor only stays for a week.

Barnabas: How well you look after me.
Julia: A habit, I suppose. 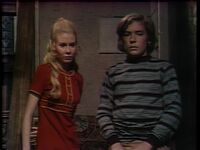 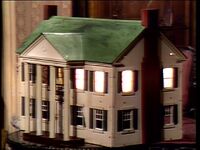 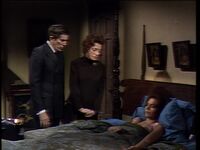 Looking after Maggie
Community content is available under CC-BY-SA unless otherwise noted.
Advertisement