Roxanne learns Sebastian has a date with Maggie.

The great house at Collinwood as it looks in the present time. By way of a mysterious experience in the future, in the year 1995, Barnabas Collins and Julia Hoffman have learned the catastrophe will strike Collinwood in this year of 1970. But how, and precisely when, they do not know. They are also unaware that the two children in the house, David and Hallie, have already been influenced by supernatural forces. On this night, David Collins has found a mysterious, cryptic note, and has gone to the tower room to carry out its instructions, unaware that his actions could lead to tragedy.

David goes to the tower room and waves a green flag. Once he's finished, an unmarked grave in the graveyard starts to open.

Thunder rages over Collinwood as David waves the green flag. He calls out for Gerard and asks what the note means, but he doesn't appear. Julia interrupts him and tells him she heard him calling for him, and that she saw him take Gerard's note out of her book in the drawing room. She grabs him and retrieves the note and asks him what it means. David says he only came to the tower room out of curiosity, but Julia is persistent. She asks more questions about the model ship, known as the Java Queen which was also a real ship that existed in the 1840s and its captain was an evil man named Gerard. David snaps and again says he doesn't know anything, and runs out of the room.

In the drawing room, Barnabas arrives and meets Maggie, who appears to be sad. She tells Barnabas the children have become so "cold and distant" as of late, and says she feels a strange presence in the house that may be affecting them. Barnabas gives Maggie a hug, and prepares to bite her.

Julia arrives just in time to stop Barnabas from biting Maggie. She informs the two that she had an unpleasant scene with David in the tower room, and Maggie leaves to go check on him. Julia scolds Barnabas for almost making Maggie his victim once again, but Barnabas promises that he is in control of his urges.

The next morning, Maggie is in the drawing room. David comes in and takes something from the desk. He tells her he is "going to see a friend," but he doesn't say who and leaves the house.

Later, David shows up at Sebastian's house and asks him to draw up his horoscope. Sebastian is shocked with David's request. David asks him if he is afraid, but Sebastian says he just wants time to think about it and ushers David out. Once he is gone, Sebastian decides to himself that is going to tell Elizabeth everything he knows about the catastrophe that is about to happen at Collinwood.

That afternoon, Sebastian shows up at Collinwood and asks to see Elizabeth, but Maggie informs him she is out for the day. Sebastian takes a quick liking to her and invites her out to dinner that evening. Surprisingly, Maggie agrees.

Sebastian returns home and Roxanne demands to know where he has been. He doesn't admit that he went to Collinwood, but does say he is going out for dinner and abruptly leaves. Roxanne is still upset with him and follows him out of the house.

At night, Barnabas is surprised that Maggie agreed to have dinner with Sebastian, but Julia doesn't know why he's upset about it. Barnabas knows Sebastian is a fraud and can't be trusted. Moments later, Sebastian brings Maggie back to Collinwood, and she is in a very good mood.

Sebastian returns home, where Roxanne is waiting for him. She seems very jealous of Maggie, but Sebastian tells her he plans to see her again soon.

Back at Collinwood, Barnabas instructs Maggie to keep a close eye on David from now on. Barnabas prepares to leave for the night, and Maggie offers to walk him back to the Old House.

About an hour later, Maggie finally returns and passes out on the staircase. Julia goes to examine her and discovers bite marks on her neck.

David: I don't know anybody named Gerard, and I never have.

David (asking if Sebastian would do his horoscope): If it's a question of money, I have forty dollars saved up. 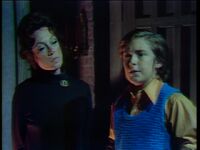 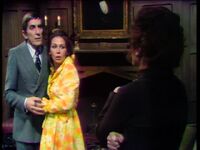 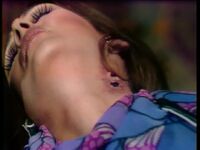