The menacing spirit of Gerard has taken Elizabeth into his power.

The great house at Collinwood as it looks in present time. For Barnabas Collins knows that one day soon the interior of the house will be in ruins because of a mysterious experience in the future, in the year 1995. He has learned that the catastrophe will strike Collinwood in this year of 1970, but how and precisely when is something he has been unable to learn. Thus far, the mistress of Collinwood, Elizabeth Stoddard, has refused to believe the forecast of disaster. But on this night, Elizabeth has suddenly been awakened to the supernatural presence in the house. And now she realizes that drastic action must be taken if tragedy is to be averted.

Elizabeth runs down the stairs to the foyer, screaming for Julia that they must get the children out of the house immediately. She rushes into the drawing room and sees Gerard.

Elizabeth asks Gerard who he is and what he wants, but he simply shuts the doors.

Upstairs, David is pacing around Hallie's room, wondering why they haven't seen any of the spirits in a couple of days. Hallie wonders if they really are free of them because they've managed to resist the playroom. David decides to go to Gerard's grave in hopes of getting a sign. Hallie thinks it's a terrible idea, but agrees to go with him.

Back in the drawing room, Gerard puts Elizabeth under his power. She agrees that the children must not be taken from the house. In the foyer, Julia approaches the doors and hears Elizabeth talking. She opens the doors and Gerard disappears, but is confused as to why she is standing in the dark and asks who she was talking to.

Elizabeth, in a daze, says she was just on the phone. Julia senses Gerard is nearby, but Elizabeth calmly tells her that there is no one else in the house and thinks the idea of an impending disaster is a figment of Julia's imagination. Changing topics, Julia shows Elizabeth a book that talks about how a ship (the real one that David has a model of) shipwrecked on this very day in 1841 near Collinsport. Elizabeth doesn't seem to care, and walks out of the room in a zombie-like trance. After Elizabeth leaves, Julia opens the book and reads about the shipwreck. Only the captain survived, and it was prophesied that his crew would one day return from the dead and destroy. While Julia reads, David and Hallie sneak out the front door.

David and Hallie arrive at the graveyard and visit Gerard's grave. David says they must stand on his grave at midnight to see if his spirit is at rest. While they are waiting, Hallie notices a fenced off area of the graveyard. David tells her that only the most evil spirits reside there, and that part of the graveyard hasn't been used since the mid 19th century. Midnight finally approaches, and a large crash of lightning is heard. Hallie screams as she sees Gerard in the distance.

Gerard approaches David and Hallie and reaches out for them, but they flee the graveyard just in time. They arrive back at Collinwood, but are immediately caught by Julia. She threatens to tell Elizabeth, but the children agree to talk to Julia about what they were doing instead. The two perpetuate a lie that they were out looking at the stars, but Julia doesn't buy it. As Julia talks to Hallie, David notices a letter written by Gerard inside one of Julia's books and he quietly removes it. Julia finally excuses the children and wonders how she can get the children to talk about what they know. As Julia heads upstairs, she notices Elizabeth on the landing with a statue, which she places near the railing. Julia realizes it is the same statue that nearly killed her in 1995.

Julia shares her concerns with Elizabeth, but Elizabeth is still in a trance and tells her to stop worrying about the future so much.

Upstairs, David shows Hallie the letter Gerard wrote. In the letter, Gerard addresses a group of unknown people to look for a signal that consists of a green flag being waved three times from a window. The two don't understand anything about the letter, but David says they should do something to please Gerard since he is so upset. David decides to go to the tower room to see if he can find a green flag, but Hallie refuses to go with him.

David arrives at the tower room and finds a green flag. He opens the window and waves it three times. In the graveyard, an unmarked grave begins to open.

Elizabeth (to Julia): I think the idea of spirits at Collinwood is a figment of someone's imagination. My horoscope has convinced me more than ever. 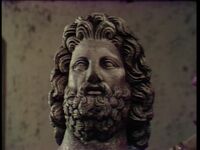 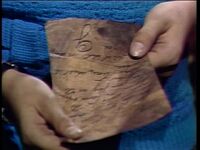 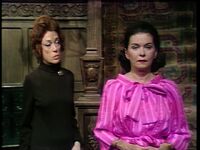