Julia catches Quentin's in Daphne's room and Gerard disappears. Quentin claims he heard someone walking through the West Wing, but didn't see anyone. Julia can feel Gerard's presence in the room, but feels they should stay in the room to see if anyone appears. Quentin gets upset because he feels that Julia and Barnabas are accusing everyone at Collinwood of knowing something about the impending disaster. He quickly changes the subject to Gerard and asks Julia if there is a connection, and possibly love, between Gerard and Daphne. Julia finds his question most curious and asks why he cares. Quentin says he only wants to know for future reference before hastily leaving the room.

At Collinwood, a drunken Quentin leaves the drawing room as Sebastian and Roxanne arrive to meet with Elizabeth, however Elizabeth only wants to speak to Sebastian, and leaves Roxanne in the foyer with Julia. Julia is struck by the resemblances between Roxanne and the one from Parallel Time. 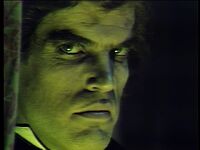 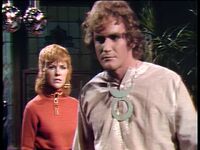 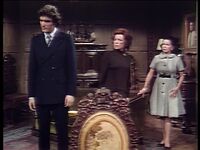