On Gerard's orders, Daphne lures Quentin to her room, where Gerard waits to strangle him.

The great house of Collinwood in 1970, a house under siege. This night, David and Hallie have had the same dream. A dream that took place in a distant time. A dream in which a mysterious stranger led them to the drawing room, where they saw two children lying on a bier, dead. Children they had seen in the playroom. Children who looked exactly like them. Now, David meets the mysterious stranger of his dream.

Gerard approaches David and corners him in his room. He closes the door and continues to approach him.

Julia hears David's screams from the hallway and comes rushing in, and Gerard disappears. Julia can instantly sense Gerard's presence, but David claims there has been no one in the room other than himself. She hears the playroom music and David claims he only had a nightmare. Julia describes Gerard without actually saying his name, but David again says he hasn't seen him and tells her to get out of his room and leave him alone.

Meanwhile, Quentin is in Daphne's room in the West Wing and he asks her what is happening at Collinwood. He loses his train of thought and kisses her as Gerard watches in the corner of the room.

Daphne is visibly worried about Gerard being in her room and motions for Quentin to leave. Quentin still just wants answers, but Daphne sadly shuts the door on him. Gerard reappears and gives Daphne a quill and orders her to write something on a piece of paper.

The next morning, Sebastian is in the drawing room reading over Elizabeth's horoscope. Julia wonders who 'the stranger' he mentioned in the previous horoscope was, but Sebastian says he doesn't know. She changes the subject and asks him how he is enjoying his time in Collinsport, but Sebastian tries to dodge her questions. Julia pleads with him again to help them against the spirits in the house and save the children, but he gets upset and storms out. David catches him before he leaves and asks if he can talk with him.

David takes Sebastian to his room and also asks who 'the stranger' was; Sebastian says he doesn't know and assures David that everything is going to be fine.

Later that night, Quentin is in the drawing room and finds a note from Daphne which reads, "I will tell you all tonight. Midnight. My room." Gerard watches him read the note from outside the window, but disappears when Julia walks in. Quentin apologizes for not being so helpful to her and Barnabas as of late. Julia notes that the house seems eerily quiet and goes to check on David.

Julia arrives at David's room and notices the pirate flag on the model ship. David catches her examining the ship and again shouts at her to leave.

Meanwhile in Daphne's room, Gerard holds up a piece of rope and makes a strangling motion as Daphne watches.

At 10:30pm, David approaches Julia in the drawing room and apologizes for his recent hostile behavior. Julia remembers that she left Elizabeth's horoscope in his room and they go upstairs to retrieve it.

Back in Daphne's room, Daphne clearly does not want Gerard to kill Quentin, but Gerard motions to her that he must, and he kisses her.

In the drawing room at 11:55pm, Julia arrives and tells Quentin that Elizabeth's horoscope reads "tomorrow an enemy will become a friend." She invites him for a drink, but Quentin is in a hurry and leaves.

At midnight, Quentin arrives at Daphne's room. He calls out for Daphne, but Gerard sneaks up from behind and prepares to strangle him.

Julia: David why aren't you asleep yet?
David: How can I go to sleep in a house like this, with all you people crawling all over the halls?

Julia: Mr. Shaw, there are spirits in this house. They are very vengeful spirits. They want to destroy this place. I know. I know. And they will start with the children.

Quentin: You and Barnabas sound as if you're enlisting soldiers before a war has been declared.
Julia: Oh, Quentin, how alone Barnabas and I would feel without you.
Quentin: I don't know why. I'm not dependable.
Julia: Nobody is fooled by your own version of yourself.

Julia: I don't know. It's so quiet here. It's almost eerie.
Quentin: Well then, you and Barnabas can figure out the mysteries of Collinwood yourself. 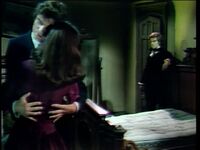 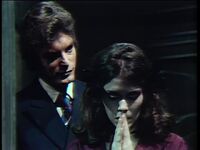 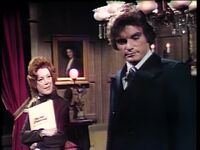 Quentin & Julia
Add a photo to this gallery
Retrieved from "https://darkshadows.fandom.com/wiki/1087?oldid=142835"
Community content is available under CC-BY-SA unless otherwise noted.