David dreams that Tad and Carrie are dead and laid out in the drawing room.

Collinwood in 1970, where the spectral forces that have invaded the great house continue their slow but certain conquest of David Collins and Hallie Stokes. On this night, the children have heard Julia Hoffman speak of a mysterious staircase. A stairway she says will lead to a different time. But their search is not for the stairway, but for the voices they hear calling them.

David and Hallie walk into the playroom and see Tad and Carrie pleading with them to follow them up the stairway through time.

David wants to go up the stairway, but Hallie resists and the ghosts of Tad and Carrie disappear. They re-open the door to the playroom and discover it has turned back into the linen closet.

In the drawing room, Elizabeth confesses to Quentin that she feels a presence in the house and that her horoscope has been troubling her lately. Her horoscope for today reads that a stranger will be on the Collins estate. Elizabeth begs a troubled Quentin to tell her anything he may have seen, but he claims he hasn't noticed anything different at Collinwood.

Upstairs in David's room, Hallie suggests the two run away from Collinwood forever to escape the playroom and the influence Tad and Carrie have over them. David thinks she just needs to settle down, and they decide to leave the room. Before they can leave, they hear someone lock the door from the outside and they are trapped.

Hallie begins to cry as she and David are still trapped in David's room. David decides to crawl out through the window so he can re-enter the house and unlock the door. Hallie wants to come with him so she isn't by herself, but David refuses to let her go with him. Once David is gone, Hallie smells lilacs, but Daphne doesn't appear. In the hallway, Elizabeth hears Hallie crying and opens the door. Elizabeth demands to know who locked the door from the outside and Hallie says it was David.

Quentin is drinking by himself in the drawing room and starts rambling to himself about who the stranger from Elizabeth's horoscope might be. He calls out to Daphne and decrees that he wishes he never met her. David finds him, but quickly leaves when he realizes he is drunk.

In David's room, Elizabeth doesn't seem to believe Hallie's story that David locked her in the room. David finally returns and Elizabeth demands to know the truth.

David lies to Elizabeth and goes along with Hallie's story that he locked her in his room. He somberly apologizes to both Elizabeth and Hallie. Before Elizabeth leaves, she mumbles about having strangers in the house, which gets the children thinking if she is on to them. Once she is gone, David notices that the model ship is back in his room and there is a pirate flag on top of it. David wonders where it came from, but Hallie doesn't want to know and runs out.

In the drawing room, Quentin is reading through the journal of the Quentin who lived in 1840 when Elizabeth walks in. He shows her an entry that is dated on the exact date from 1840 which reads, "Tomorrow we bury Carrie and Tad."

Later that night, Elizabeth returns to David's room while he is asleep. She is still paranoid about a stranger being in the house, but has yet to see anyone and is just happy to see that David is safe. Once she leaves, David begins to dream. While he is lying in bed, his door opens and Gerard is standing in the hallway, where Hallie also joins the two. The children walk downstairs where Gerard is waiting, but he disappears when a carriage approaches. Flora Collins, who looks just like Elizabeth, rushes into the foyer, screaming for Quentin. Quentin emerges from the drawing room and takes her inside. A loud scream is heard, and Quentin takes Flora upstairs. David and Hallie emerge from hiding and enter the drawing room, where they see Tad and Carrie dead.

David awakens and meets with Hallie in the hallway, who apparently has also had the same dream. They wonder who the other man was in the dream, and Gerard appears to them in the hallway.

Elizabeth: Quentin, please save the ghost stories for Julia and Barnabas.

Elizabeth: He's all right and I thank God for it.

Quentin: There are some things in this world we can do nothing about.

David: Who are you talking to?
Quentin (drunk): The dregs, David...the dregs of this glass. That's where all the answers are.
David: I thought you said something about a stranger.
Quentin: Oh, well, I'm in immediate danger of becoming a stranger to my glass, but that can be easily remedied. Yes, it can be. [Pours drink.] Ah ha ha...friends again.

Dark Shadows Every Day - Episode 1086 - A Sense of Something 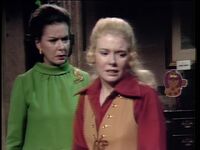 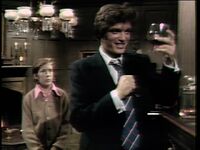 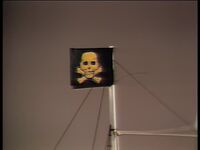