Julia discovers a drawing of the 1840 Quentin Collins' stairway into time.

Collinwood, 1970. Although Barnabas Collins and Julia Hoffman have been unable to detect evidence of the catastrophe that is destined to happen within this year, David Collins and Hallie Stokes have found themselves enveloped by a ghostly secret. A secret they recorded on the written page. But now that record is missing. And their search for it will lead them only further along the path toward the final disaster.

David and Hallie go to the playroom and find the ghosts of Tad and Carrie reading David's journal.

Hallie begs David to speak to the ghosts, but they soon disappear. Moments later, the journal re-appears on the table and they begin to read it. They sit down on the same chairs Tad and Carrie were on and they both become possessed. The two decide to take the book to Daphne across the hall. As they walk across the hallway they are nearly caught by Quentin, who is retrieving more books for Julia to study.

Quentin brings the books to Julia, who is now looking for information regarding the stairway that Barnabas and Julia used to return to 1970. After looking through a journal, Julia discovers plans for a "proposed stairway into time" and it is signed by Quentin Collins from the year 1840.

The children go to Daphne's room and discover a new picture on her desk. Daphne walks in and David (still possessed by Tad) shows her the journal written by David and Hallie. Daphne instructs the children to burn the journal.

The possessed children burn the journal as Daphne watches. As they watch the flames, the three hear Quentin and Julia enter the West Wing. Daphne touches the two children on the forehead and she disappears. Once they are gone, the possession of the children ends and they wonder why they are in Daphne's room. In the hallway, the two open the doors to the playroom, but they see the linen closet instead. Julia wants to open the door across the hall (Daphne's room), but Quentin tries to talk her out of it because they "are wasting time." David and Hallie hide as Julia opens the door.

Julia walks around Daphne's room as Quentin is clearly nervous, but he finally convinces her to head back downstairs. The children come out of hiding and Hallie again asks David why they can't just tell Julia everything. Before they leave, they notice the destroyed journal on Daphne's desk.

In the foyer, Quentin smells lilacs and realizes that Daphne must be close by. He returns to the West Wing, nearly catching the children again in the process, and enters Daphne's room. Daphne extends her arms to him, but he refuses to embrace her and wants her to end her power over him so he can help Barnabas and Julia. He leaves and Daphne appears saddened.

Quentin stops himself from leaving Daphne's room. He approaches Daphne and kisses her. She gives him a journal that belonged to the Quentin Collins of 1840 and disappears. Quentin wonders if she is trying to help him and Julia, or destroy them.

Quentin gives Julia the journal Daphne gave him. As they talk in the drawing room, David and Hallie walk downstairs, but are summoned by Tad and Carrie and they run back upstairs. Julia reads the journal and finds his discussions about the stairway through time.

Meanwhile, the children return to the playroom. They find Tad and Carrie on the stairway through time and beckon David and Hallie to follow.

Julia: (reading from the 1840 Quentin Collins' journal) There is no such thing as time. There's only space, physical space, and it is space that measures the distance between those points which we, in our ignorance and folly, insist are points in time. All time is one point, one moment. It is ever existent and it is ever accessible, and it is physical space that can be used to make all time easily accessible.

Quentin (to Daphne): I can no longer lie to my friends! One minute I help them, the next I betray them.

Dark Shadows Every Day - Episode 1085 - Our Ignorance and Folly 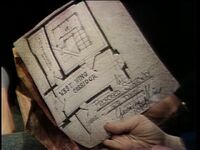 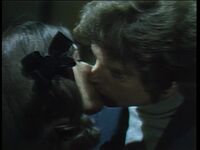 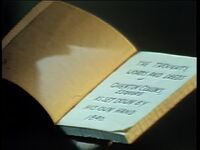 The Journal of Quentin 1840
Community content is available under CC-BY-SA unless otherwise noted.
Advertisement