Julia tells her story to Sebastian, but he denies that his supernatural vision can be of help.

The great house at Collinwood in the present time. Only Barnabas Collins and Julia Hoffman are aware that Collinwood is about to suffer a mysterious disaster unless they can prevent it. One of the clues they have concerns a mysterious place called Rose Cottage. They have been unable to learn what or where Rose Cottage is. But the two people who are in the greatest danger, the children, have discovered that Rose Cottage is a doll's house, and to their horror, they have learned that two of the dolls inside it represent themselves.

David and Hallie destroy the dolls and return to the West Wing and discover that the playroom still exists, and that the dolls they had previously destroyed are now back in Rose Cottage.

Hallie feels that everything is a lost cause and Collinwood will soon be taken over by the spirits from the past. David wonders if Daphne will punish them. The children hear the music from the carousel playing, but the carousel isn't actually moving. They wonder where the music could be coming from.

In the drawing room, Stokes warns Julia that they need to start figuring out the remaining clues from Carolyn's 1995 note. Three of the events have already taken place and there are only three left before the destruction of Collinwood is complete. Stokes still feels that Sebastian can be a great asset to them, although he doesn't rule out the notion he might be a fraud. He suggests to Julia that she should tell Sebastian everything that happened to her and Barnabas from the moment they left Parallel Time to the moment they returned to 1970. Julia still wonders where Rose Cottage is, which is the next event.

Back in the playroom, Hallie realizes that the music is coming from inside Rose Cottage, and a light in the dollhouse turns on.

David looks inside Rose Cottage and sees a man, alive, but he disappears before Hallie can see him. The two decide to go back to David's room and start a journal of everything that has happened to them.

In the foyer, Julia again senses Gerard's presence in the house, but still points out it is not as strong as it was in the future. Stokes deduces that Gerard is "not ready to strike" just yet.

Upstairs, Hallie thinks it's a dumb idea to write down everything that has happened when they could just tell someone in the house. David says they must write everything down because it's "the only way they'll know what happened to us after we're gone."

That night, Sebastian arrives at Collinwood and is greeted by Stokes and Julia in the drawing room. Sebastian wonders why he has been brought to Collinwood. Stokes informs him that Julia has been to the future and wants to talk to Sebastian about his vision.

Meanwhile, David writes an entry in his journal about Rose Cottage and tries to be as detail-oriented as possible, as Hallie looks on.

Back in the drawing room, Julia concludes her story about her trip to the future and Stokes begs Sebastian for his help in preventing the disaster. Sebastian isn't sure if he can help, but Julia asks him for assistance in locating Rose Cottage. He goes into a trance and he sees the spinning carousel and hears the playroom music. He has a vision of the playroom and sees the dollhouse, but doesn't tell Stokes and Julia exactly what he saw. Julia suggests having Sebastian talk to the children, which he agrees to do.

In David's room, the children finish an entry in David's journal just as Stokes arrives to bring the two downstairs.

As Julia returns to the drawing room, she notices Sebastian is playing the same tune of the playroom music on the piano.

Julia comments on what Sebastian is playing, and he says he just made the tune up. Julia realizes that Sebastian saw the playroom in his vision and calls him out on it. Sebastian gets upset with her accusations and abruptly leaves the house. Stokes returns and Julia tells him that Sebastian knows more than what he is telling. The two decide they must get Sebastian to cooperate before it's too late.

The children return to David's room and discover that the journal is missing. They go to the playroom and see the ghosts of Tad and Carrie reading the journal.

Professor Stokes: Julia, the fact is you and Barnabas have accomplished almost nothing.

Dark Shadows Every Day - Episode 1084 - 100 Things That I Would Like David and Hallie to See When They Open the Playroom Door, in No Particular Order 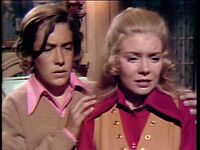 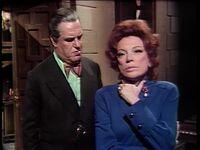 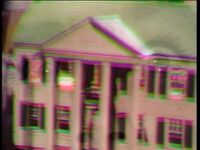 Sebastian's Vision
Add a photo to this gallery
Retrieved from "https://darkshadows.fandom.com/wiki/1084?oldid=142242"
Community content is available under CC-BY-SA unless otherwise noted.