The great house at Collinwood in the present time. Only Barnabas Collins and Julia Hoffman are aware that Collinwood is going to suffer a major disaster, the nature of which is not known even to them. Barnabas and Julia have six clues to go on. One of these concerns a mysterious place called Rose Cottage. Thus far, no one they have talked to has any idea what or where Rose Cottage is. On this night, the two people who are in the greatest danger of all, the children, will find out.

David and Hallie show up at the playroom after just having the same dream. They enter the room and discover a large dollhouse has now appeared and is the same house they were in during their dream.

The children assume that Rose Cottage is the dollhouse and agree that in the dream, they felt like they belonged in Rose Cottage. Hallie wonders if it's too late to help themselves and prevent the impending disaster.

The next morning, Stokes is reading in the drawing room and Hallie enters the room, surprised to see him. Stokes feels that Hallie has been acting differently. Hallie becomes defensive and feels that things have been odd ever since Barnabas and Julia returned, and she doesn't feel that anything is going to happen because of Sebastian's horoscope for Elizabeth. She runs out of the room and Stokes decides to call on Sebastian.

Later that day, David and Hallie are in the drawing room discussing her encounter with Stokes. David fears that Stokes may become suspicious, and decides to snoop on Elizabeth's horoscope. Hallie admits to David she feels that something horrible will soon happen at Collinwood.

Meanwhile, Stokes arrives at Sebastian's house to discuss Elizabeth's horoscope. Stokes asks for Sebastian's assurance that the horoscope is exactly correct. He hesitates, but Sebastian promises that he was very honest with it. Stokes isn't quite so sure, but Sebastian tells him he is a clairvoyant and can see into the future.

Stokes is surprised at what Sebastian has just revealed and asks him to prove it. Sebastian goes into a trance where he can see Collinwood into the future, but he becomes frightened. He quickly regains his composure and says the children are perfectly fine and asleep. Stokes is suspicious, but eventually leaves. Roxanne then emerges from the other room and feels that Sebastian made a mistake for telling Stokes that he can see into the future. She asks him if he really did see the children in his vision. He says he did, but they weren't sleeping. They were dead.

That night, David and Hallie return to the playroom and David decides they should destroy the dolls in Rose Cottage in hopes of ending the spell that has taken form over them. The children remove the dolls and leave.

At Sebastian's house, Sebastian is still troubled about his vision of the future Collinwood. Sebastian wants to tell Elizabeth, but Roxanne says Elizabeth is "too important" to them and he needs to be patient.

Back at Collinwood, the children throw the dolls in the fireplace of the drawing room. The two both feel a sense of freedom and decide to go back to the West Wing to see if the playroom is still there.

In the West Wing, David and Hallie find that the playroom still exists and the dolls are back in Rose Cottage.

Hallie: I don't understand why the adults in this house are acting so weird. 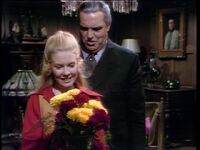 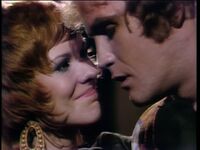 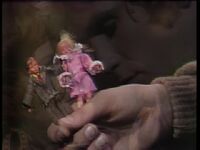 The Dolls
Community content is available under CC-BY-SA unless otherwise noted.