David is afraid that he and Hallie will become Tad and Carrie from 1840.

Collinwood in 1970. A Collinwood threatened by an unknown disaster. For Barnabas Collins has just returned from 1995 with six clues to what will happen before the catastrophe that will cause the family to leave the great house. One of the clues is an unfinished horoscope, and Sebastian Shaw has just refused to complete Carolyn's. So Barnabas goes to Sebastian to try and persuade the astrologist to finish the chart. But he is unsuccessful, and Sebastian leaves the room in anger.

Roxanne apologizes for not recognizing Barnabas, but is surprised he knows her name. She informs him that she works with Sebastian and just arrived in Collinsport a few weeks ago, but she is fascinated by his story of another Roxanne from a different time. Roxanne wishes to meet the other Roxanne, but Barnabas sadly laments that it's not possible. Barnabas asks for Roxanne's help in finishing Carolyn's horoscope, but she apparently won't do anything without Sebastian's approval. He invites her out to dinner and she accepts.

At Collinwood, Hallie enters the drawing room to find Julia reading tax records from Collinwood during the 1840s. Julia tells Hallie she is trying to find out about a place called Rose Cottage. Hallie asks many questions about why she is so interested in finding Rose Cottage, which makes Julia wonder if she knows more than what she's leading on to. Suddenly, Daphne appears behind Julia and motions for Hallie to follow her. Hallie quickly excuses herself from the room.

Hallie goes to David's room and David quickly realizes she has been possessed by Carrie. Hallie points out that "she" is downstairs trying to find Rose Cottage and begins laughing hysterically.

Hallie, as Carrie, continues to laugh about Julia's search for Rose Cottage. Hallie gets incredibly angry when David asks what Rose Cottage means to them, and David starts shaking her. Hallie finally comes to her senses and doesn't remember anything that just happened. David wonders if they should continue to follow Daphne's orders or not, while Hallie is worried that they may soon be permanently possessed by Tad and Carrie.

In the drawing room, Julia gets a call from Roxanne, looking for Barnabas.

Roxanne asks Julia to let Barnabas know that she cannot have dinner with him that evening, but doesn't say why. Just as Julia hangs up the phone, Barnabas walks in and tells her that he saw Roxanne at Sebastian's house. Barnabas is convinced that the two Roxannes are the same, but Julia doesn't agree with him.

Upstairs, David wonders if they should go into town to look up information about the model ship and Rose Cottage. Hallie smells the lilacs and realizes Daphne is about to appear, and she soon does. David pleads with Daphne to tell them about Rose Cottage, and she smiles.

David asks Daphne if she can take them to Rose Cottage, but Daphne motions that she can't and soon disappears.

At Sebastian's house, Roxanne is by herself and Barnabas shows up. He asks why she had to cancel on him, but Roxanne is evasive and tells her she simply "can't see him." Barnabas says he can assure her that they will be seeing each other again soon.

Back at Collinwood, David has a dream where he is in a strange house, but Hallie is there and says they are inside Rose Cottage. She explains that they are at a birthday party. They enter a kitchen area and there are two dolls sitting at the table and there are two spots open: one for Tad and one for Carrie. Hallie explains they are at Gerard's party and they need to sit down. David is confused, but sits down anyways. He looks out the window and sees Daphne laughing at them.

David wakes up and runs to the playroom, but Hallie is already there and she evidently had the same dream. They enter the playroom and find a large dollhouse is now sitting on the table. They look in the kitchen and see the same dolls that were in the dream. 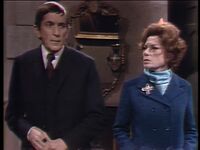 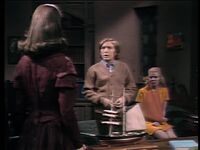 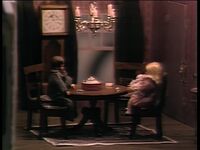 Doll House
Add a photo to this gallery
Retrieved from "https://darkshadows.fandom.com/wiki/1082?oldid=142240"
Community content is available under CC-BY-SA unless otherwise noted.