The great estate of Collinwood in 1970. Barnabas Collins has returned from 1995, determined to stop the unknown catastrophe which is to happen this year. The catastrophe which ruined the Collins family and left the house deserted. But though Barnabas makes every effort to alert the family to the trouble ahead, there are two children in the house with a secret. A secret which grows more complex and mysterious with each passing day, for they have discovered a room that only they can see and enter.

Hallie goes to the playroom and finds David, who is wearing old-fashioned clothing and in a trance. He doesn't respond to any of Hallie's questions, and she leaves in disgust. After exiting the playroom, she sees David in the hallway, wearing his present-day clothing.

Hallie explains that she just saw him moments ago in the playroom wearing 19th century clothing, but David is confused. After she finishes his story, David realizes she saw the ghost of Tad. The two enter the playroom, but Tad is gone. David calls out for him, but the two only hear the sound of children's laughter.

In the drawing room, Carolyn is reading an astrology book when there is a knock at the door. Sebastian arrives at Collinwood and informs her that he has her horoscope ready. Carolyn notes that she has been reading the book he gave to Elizabeth and has found it fascinating, but Sebastian calls her bluff and confesses that he started Carolyn's horoscope, but chose not to finish it because he knows her real motives for going to see him. Referring to her as "Mrs. Hawkes," he tells her he is not Jeb and he has no further plans to see her. As Sebastian leaves, Barnabas spots him from the landing and is shocked at his resemblance to Jeb. Carolyn reluctantly tells him he is merely an astrologer who refuses to finish her horoscope. Barnabas realizes that an unfinished horoscope is one of the clues relating to the impending catastrophe.

Barnabas isn't sure what an unfinished horoscope means, but he is determined to get Sebastian to finish it. He apologizes to Carolyn for the fact that Sebastian looks so much like Jeb, and he comments about Roxanne from Parallel Time.

Upstairs, Hallie again feels that they have to tell the other members of the family about everything that has been going on. David says they must not because something worse might happen to Hallie. Hallie agrees, but only on the condition they never enter the playroom again. David reluctantly obliges, much to the delight of Hallie. After Hallie leaves, David begins to read and suddenly hears the playroom music. He hears the voice of Tad again and a dresser drawer mysteriously opens, revealing the old-fashioned clothing that Hallie saw Tad wearing. The voice of Tad beckons David to go to the playroom, and he walks out of his room in a trance.

Hallie enters the drawing room and sees Carolyn reading the astrology book. Hallie wonders why people want to know so much about the future, because it can often lead to bad things. Carolyn is struck by her behavior, but Hallie passes it off as still being affected by her parents' accident.

Later that day, Carolyn walks downstairs and mentions that David is missing, but Hallie doesn't know where he is.

In the playroom, the music stops and David smiles. Hallie soon enters the room and yells at David for returning the playroom, but she quickly realizes that he is possessed by Tad when he refers to her as Carrie. Hallie is frightened and wants to leave, but David tells her that before they can do anything, they must find a place called Rose Cottage.

Hallie finally gets frustrated enough to the point where she leaves, with David (still possessed by Tad) close behind. Once the two emerge from the playroom, Tad's possession of David ends and David wonders how he got to the West Wing. Hallie helps him back to his room.

That night, Barnabas visits Sebastian in regards to Carolyn. Sebastian doesn't seem interested in discussing Carolyn, but Barnabas offers him any amount of money to finish Carolyn's horoscope. Despite being intrigued by Barnabas' offer, Sebastian refuses and says he doesn't want anything else to do with her. While they talk, Sebastian suddenly stops and says he has to go "meditate." After he hastily leaves, Barnabas hears a woman's voice calling for Sebastian, and Roxanne walks in.

Carolyn: The dead do return. I believe that.

Barnabas: A meeting can start a romance, but if the meeting never takes place, our whole lives are changed. How well I know that...
Carolyn: So do I.
Barnabas: We have much in common, Carolyn. I have lost someone I love. Her name is Roxanne.

Hallie: (on the phone to Professor Stokes) Oh, everything here is just groovy!

David: (possessed by Tad) I never thought I'd have to introduce you to yourself. And now I have.

Sebastian: I'm an astrologer, Mr. Collins, not a doctor. 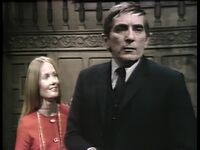 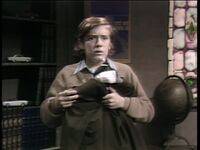 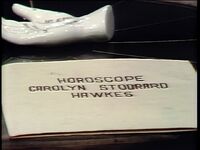