Carolyn asks Sebastian to do her horoscope; Hallie sees the ghost of Tad.

In this present time, Barnabas Collins and Julia Hoffman have returned to Collinwood after a terrifying experience in the year 1995. There, they learned that a disaster occured at Collinwood in the year 1970. But since their return, there has been no indication of an impending catastrophe. Unknown to them, however, strange things have begun to happen to the two children in the house. On this night, in an attempt to find out what these things mean, the two children have decided to hold a séance in a strange playroom.

As David and Hallie conduct a séance to contact Gerard and Daphne, the children hear the voice of Tad stating, "Let us live."

Hallie mentions the voice they heard sounded exactly like David's, but he wasn't actually speaking. Hallie begs for him to come to his senses and she breaks the connection, and David passes out.

In the drawing room, Elizabeth is reading her horoscope as Carolyn walks in. Carolyn comments on Elizabeth's sudden interest in her horoscope, but Elizabeth does mention that Sebastian's work has been incredibly accurate. However, the horoscope states there will be "crisis and tension" during the nighttime hours. Carolyn decides to have Sebastian draw up her horoscope, but Elizabeth won't allow it because she knows the only reason she wants to is because of Sebastian's resemblance to Jeb, whereas Elizabeth was actually worried about the future of Collinwood. Carolyn confesses her earlier dream (before Barnabas left for Parallel Time) where Jeb appeared to her and told her they would be together again. Elizabeth feels she is just stressed out and needs more time to accept Jeb's death. After she leaves the room, Carolyn calls Sebastian.

Back in the playroom, David finally revives and asks Hallie what happened. The two recall the séance and Hallie decides it is time to tell Elizabeth everything that has happened to them.

David doesn't want to tell Elizabeth anything because he is worried about what Gerard or Daphne might do to them, but Hallie doesn't seem to care. David again hears the voice of Tad in his head saying "Let us live," and he runs out of the room.

Later that day, Hallie goes to David's room while David looks at the model ship. They discuss the séance and the voice they heard, and David finally agrees to tell Elizabeth everything.

Carolyn meets with Elizabeth in the drawing room and tells her she is going shopping in Collinsport for the day and won't return until nightfall. Once she leaves, David and Hallie walk in and Elizabeth notices their odd behavior. Hallie admits that "something terrible" has happened in the West Wing of the house. As David is about to explain everything, the model ship appears on the desk in front of David.

Elizabeth beckons David to speak, but he is too frightened to speak about the playroom and instead makes up a story that he broke a valuable vase in the West Wing. Elizabeth is skeptical of his story, but she yells at both of them to never go to the West Wing again. She walks out in anger and the two wonder how the ship got to the drawing room. David decides to take the ship to the playroom and leave it there.

Carolyn goes to visit Sebastian to have her horoscope written. Sebastian is curious about Carolyn's motives, but Carolyn doesn't see that as an issue. Carolyn takes charge of the conversation and begins asking many personal questions, such as where he is from and why he chose to come to Collinsport. Sebastian tells her he is from New York City and he moved to Collinsport about two months ago. He says he likes Collinsport because of its scenery and the sea, but then promptly puts an end to her questions and starts her horoscope.

David arrives at the playroom and puts the ship on the table. He hears the voice of Tad again, who is happy he didn't tell Elizabeth anything. Frightened, David runs out of the room.

That night, Carolyn tells Sebastian she appreciates the time he spent with her, but he tells her that he will need a few days to finish her horoscope. He offers her a ride home, but she hastily declines. Curious, he wonders if Elizabeth knows that she came to see him, but Carolyn feels it shouldn't matter. The two argue for a few moments before she finally leaves.

At Collinwood, Hallie goes to the drawing room searching for David, but finds Elizabeth instead. Elizabeth hopes for his own sake he isn't in the West Wing. Hallie leaves, and as Elizabeth reads her horoscope, Carolyn returns. Elizabeth notices that Carolyn didn't buy anything while shopping, but Carolyn merely says she didn't find anything and isn't feeling well.

Meanwhile, Hallie returns to the playroom and finds David wearing old-fashioned clothes riding a toy pony. Hallie attempts to speak to him, but he appears to be in a trance and doesn't notice her. Frustrated, Hallie leaves the room and finds David in the hallway wearing his present-day clothing.

Elizabeth (about Sebastian): In the first place, you heard him tell you that he wasn’t Jeb. In the second place, if he is Jeb, why wouldn’t he admit it to you?
Carolyn: Because he may not know that himself. 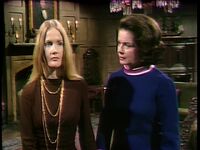 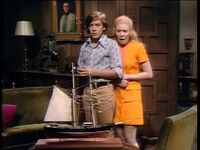 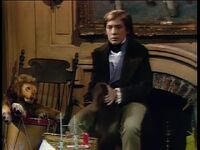