In this present time, Barnabas Collins and Julia Hoffman have returned to the great house at Collinwood after a terrifying experience in the year 1995. During that time, they learned that a disaster occurred at Collinwood in the year 1970, but since they have been back, they have seen that Collinwood would seem, on the surface, to be calm and serene. But unbeknownst to them, strange things have begun to happen to the two children in the house. And on this night, Quentin Collins has seen the spirit of a long dead woman, and spellbound by her beauty, has been lured to her grave.

Quentin arrives at Daphne's grave and she appears to him. He is confused as to why she brought him to the graveyard, but he is enchanted by her beauty. He embraces her, but Daphne prepares to stab him in the back.

As Quentin hugs Daphne, he asks her why her spirit cannot rest and offers to help her rest in peace. His concern for her causes her to put down her knife. Saddened, she disappears in front of his eyes. Once she is gone, Quentin finds the knife laying on the ground.

At Collinwood, David rushes to Hallie's room and catches Hallie wearing the old-fashioned clothing. David is in a panic and tells her that he also found old-fashioned clothing in his room. Hallie begs him to put the clothes on because it will make both her and Daphne happy, but David refuses. Hallie gets angry and leaves.

Quentin returns to Collinwood and Julia confronts him in the foyer. Julia asks him about the picnic he went on earlier in the day, and points out that now two of the events from Carolyn's 1995 note have happened. Quentin says the picnic was relatively peaceful, but Julia is still worried when she again feels Gerard's presence in the house. Quentin then decides he will perform an exorcism over Collinwood that night.

David finds Hallie in the playroom and Hallie is worried that she will become possessed. Under the possession of Carrie, Hallie tells David that she went "aboard the ship and saw Gerard and Daphne kissing in one of the cabins", and they are both very upset with her. David is confused, but the playroom door opens and Daphne enters. She appears to be angry, but Hallie says she will accept any punishment. Daphne takes Hallie's hand and motions for David to take her other hand.

In the foyer, Quentin is prepared to exorcise Collinwood. Julia wonders if they should wait for Barnabas, but Quentin says he is capable of doing it by himself. Quentin turns off the lights and begins the ceremony.

Quentin begins to perform the ceremony outside the front door as Julia looks on.

Meanwhile in the playroom, David prepares to take Daphne's hand. Just before he can, Daphne pulls her hand away and appears to be in pain, and she runs from the room. Hallie screams loudly and collapses.

Quentin concludes the ceremony and enters the house. He sees Daphne on the landing, implying that the exorcism has failed.

In the playroom, Hallie has regained consciousness, but her right arm is severely injured and she wonders why she is wearing the dress. David says they need to find out everything they can about the playroom and Daphne and Gerard.

Julia enters the house and notices Quentin still standing in the dark. He wonders why he seemingly stopped the exorcism so suddenly. Quentin agrees that there are spirits in the house, but they don't mean any harm. David and Hallie (wearing present day clothing) walk downstairs and Hallie informs Julia her arm is injured. Julia has David take Hallie to the drawing room. As Julia follows them, she scolds Quentin for thinking the spirits don't intend to hurt anyone now that Hallie is injured. Quentin thinks it was merely a coincidence, but Julia is convinced otherwise.

Later that night, David returns to the playroom with Hallie, who is now wearing a sling. Hallie is upset that David apparently made her return to the playroom, but David tells her they are going to conduct a séance. Frightened by the notion of holding a séance, Hallie refuses to participate, but David tells her everything will be fine and that he will be the one to summon the spirits of Gerard and Daphne. During the séance, they hear the voice of Tad stating, "Let us live." 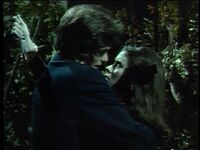 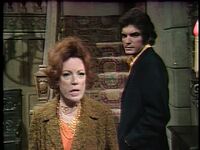 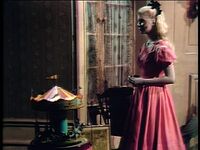 Playroom
Add a photo to this gallery
Retrieved from "https://darkshadows.fandom.com/wiki/1079?oldid=142235"
Community content is available under CC-BY-SA unless otherwise noted.