Julia senses the presence of Gerard, and Daphne leads Quentin to her grave.

A summer storm has subsided and all is quiet at Collinwood. But there are continuing hints of mystery as David Collins completes the innocent task of developing the photographs he took at a picnic that afternoon. One photograph, in particular, not only puzzles, but disturbs him.

David is still troubled by the photo of Quentin and Maggie and asks for Quentin's advice on it. He also believes it looks like someone's face is in the background, but he brushes the notion aside as an optical illusion.

Meanwhile, Barnabas and Julia walk into Collinwood and Julia instantly becomes frightened. Barnabas asks her what's wrong, and Julia tells him she can feel the presence of Gerard in the house.

Julia says she senses the presence of Gerard, albeit not as strongly as it was in 1995. Barnabas thinks they must get everyone out of the house at once, but Julia feels Elizabeth would never agree to it. He orders Julia to stay downstairs while he goes to have a talk with David and Quentin to see if they have noticed anything odd at Collinwood recently.

Quentin returns to the abandoned room in the West Wing, which was apparently Daphne's room in the 19th century. He begins to search the room for any clues about Daphne's life. In a desk drawer, he finds a silhouette portrait labeled "Gerard Stiles" and he wonders what they meant to each other. He also finds Daphne's diary and begins to read through it, but he is caught by David, who claims he saw a light from the outside and came to investigate since this part of the house is closed off. Quentin makes up a story that he is helping Julia re-write some of the Collins family history books and came to look for old notes and journals. David is skeptical of Quentin's story, but starts wondering whose room it once was. Quentin feels it's better that he doesn't know and ushers him out of the room. After they leave, Daphne appears, smiling to herself.

Barnabas arrives in David's room, but David is nowhere to be found. He notices the model ship on David's desk and instantly recognizes it from having seen it in the playroom in 1995. David finally arrives and Barnabas asks him where the ship came from.

David is initially hesitant to answer Barnabas' questions, but he finally mutters that he found it in the attic. Barnabas is immediately suspicious, but he plays along with David's claims anyway and asks him how his summer has been going, to which David replies that it has been rather uneventful. After Barnabas leaves, David grabs the photo of Maggie and Quentin from the picnic and goes to investigate it further.

Downstairs, Quentin reads through Daphne's journal and comes across an entry from late 1840 where she writes, "Tomorrow I am going to kill him. Death is the only answer." He wonders who she might be referring to until Julia walks in with more history books from the mid 19th century. Quentin asks Julia if she has found out anything more about Daphne, but Julia says she only knows she was a governess and died mysteriously in 1840. Julia finds Quentin's interest in Daphne rather odd, but Quentin denies knowing anything else about her. Barnabas walks in and tells Julia he feels that David knows more about things happening at Collinwood than he wants to admit. He notices Quentin shying away from the conversation and Barnabas asks him if he would ever conceal information from them. Quentin hesitates, and tells Barnabas and Julia he wouldn't, but his answer isn't very convincing.

Barnabas again calls out Quentin, but he rushes to the window where he sees Daphne staring menacingly at him. Quentin promises he doesn't know anything else going on at Collinwood and quickly excuses himself. Barnabas thinks he is hiding something, but Julia doesn't believe he would ever do anything to put the children in danger. Julia mentions she still feels that Gerard is somewhere in the house. Barnabas suggests having a séance to contact someone and find out what it is Gerard wants, but Julia feels it's too dangerous.

Quentin meets David in the upstairs hallway and warns him to stay out of the West Wing for his own safety. David goes into his room and finds old-fashioned clothing on his bed.

David puts the clothes in his dresser and goes to check on the photo of Quentin and Maggie. After further examination, he can see Gerard's face in the upper left-hand corner of the photo. He turns around in a panic and Daphne appears to him. David shows her the picture and asks who he is, but Daphne only smiles at him. Barnabas and Julia knock on the door, wanting to come in, but David jumps in his bed and pretends to be sleeping.

Quentin returns to Daphne's room in the West Wing and calls out for her. She eventually appears to him and he asks her if the destruction of Collinwood is really going to happen, and additionally tells her that he hates himself for not helping Barnabas and Julia. She starts to walk away from him, but she beckons him to follow.

Meanwhile, David is still looking at the photo where Gerard can be seen. He wonders who he is and what he wants.

In a zombie-like trance, Quentin walks downstairs to the foyer and out of the house. He ends up at Daphne's grave in the graveyard. He again calls out for Daphne and she appears. Quentin wonders why she has led him to the graveyard, but decides he doesn't care why and he only wants to be with her. Quentin embraces her, but Daphne holds up a knife and prepares to stab him in the back. 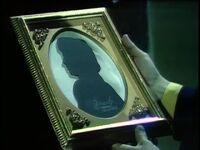 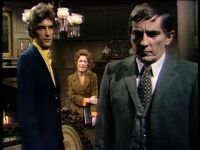 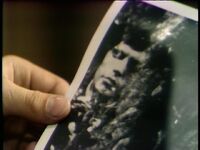 Ghostly Photograph
Add a photo to this gallery
Retrieved from "https://darkshadows.fandom.com/wiki/1078?oldid=142234"
Community content is available under CC-BY-SA unless otherwise noted.