Daphne appears to Quentin, presents him with lilacs, and leads him to an abandoned room.

When Barnabas Collins and Julia Hoffman returned from Parallel Time, they found themselves not in 1970, but in the year 1995, and all of Collinwood lay in ruins around them. Now they have returned to their own time, and their desperate efforts to avert the destruction of the great estate have met only with an ever-growing mystery. And now on this night, a new event occurs that will bring the house and all of its inhabitants closer to disaster.

Quentin falls asleep in the drawing room and has a dream where Daphne appears to him. When he awakens, he finds a bouquet of lilacs on the table. He calls out for her and she appears to him.

Daphne hands Quentin the lilacs and then gently touches his face, but seconds later, the power goes out and Daphne disappears. When he lights a candle, he notices the lilacs are on the floor and have been torn apart.

Upstairs, Maggie yells at David for going sailing after sunset, but her attention is diverted to a model ship that has appeared on his table. David also appears confused as to where the boat came from, but dodges Maggie's questions by telling her he found it in the attic. Maggie leaves and David goes to examine the ship. His nose perks up and he turns around to find Daphne watching him.

Daphne nods to David when he asks if she gave him the ship. As David gazes at the ship, there is a knock at the door. Daphne disappears and Quentin shows up, and gives David his camera for a picnic they are going on the next day. Quentin notices the smell of lilacs and asks David if anyone has been in his room recently. David denies it, but Quentin further adds that there is a rumor that a spirit has been associated with the smell of lilacs.

In a closed-off part of the house, Quentin is wondering to himself if Daphne was in David's room. Suddenly, Quentin gets the feeling that someone is watching him and Daphne appears.

Daphne leads Quentin to a room that appears to have not been in use for quite some time, but she disappears after Quentin walks in. On the desk, he finds an unfinished letter written by Daphne in 1840 where she appears to imply that someone was in love with her, but he also frightened her. Quentin begs Daphne to appear, but she doesn't. When he looks down on the desk, the letter has vanished.

The next day, Quentin, Maggie, David, and Carolyn go on a picnic. Carolyn is in a bad mood, but that doesn't stop David from taking pictures. While he takes one of Maggie and Quentin, he feels that someone is watching over the group, but there is no one there. Quentin wonders if it was anyone in particular David thought might be behind him, and David replies he figured it might have been Hallie, but she is away visiting her uncle. Quentin is clearly suspicious of David, but they take the picture and leave due to a fast approaching storm.

Back at Collinwood, Carolyn apologizes for her recent behavior regarding Jeb and Sebastian. She admits she was going to call him and ask him many personal questions about his life. Maggie accepts her apology and assures her in time she will be able to move on. Carolyn excuses herself and Quentin arrives with a family history book from the 1840s. Quentin reveals to Maggie he had a "great grand-uncle" who went by the same name, and finds it odd he shared his name with another member of the Collins family.

Upstairs, David is developing the photos from the picture and Carolyn arrives to look at them. As the two look at the picture of Maggie and Quentin, David still points out that he feels like there is someone else in the photo, but Carolyn isn't quite so sure. As the two examine the photo, Gerard appears behind them and watches over them.

David: You’re trying to tell me there’s a spirit in this room? If I didn’t know better, I’d think you were trying to scare me!
Quentin: Would it frighten you, if you knew that there was a spirit here?
David: Of course it would!
Quentin: Well, I don't mean to scare you.

Dark Shadows Every Day - Episode 1077 - The Scent of Lilacs 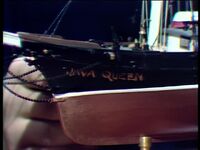 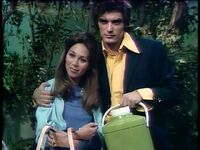 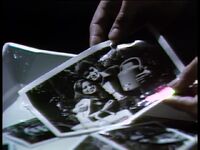 Photograph
Add a photo to this gallery
Retrieved from "https://darkshadows.fandom.com/wiki/1077?oldid=142813"
Community content is available under CC-BY-SA unless otherwise noted.