The moon over the great house of Collinwood has darkened now in full eclipse, as the Earth's shadow makes fateful progress across the path of the sun. This phenomenon has struck a deep terror in the hearts of Barnabas Collins and Julia Hoffman, for this may be the night of the sun and the moon, the first sign prophesying the destruction of Collinwood. And also on this night, Hallie Stokes and David Collins make a strange discovery of their own.

As the eclipse is nearly complete, David and Hallie enter the West Wing. They hear the music of the playroom, but it suddenly stops. They decide to leave and come back in the morning, but a door mysteriously opens and the linen closet has turned into the playroom.

The two enter the playroom in amazement and Hallie immediately becomes possessed and speaks in a very formal, old-fashioned manner. The carousel music stops and Hallie regains her senses, and she then smells lilacs. Hallie panics and runs out, and David reluctantly follows suit. After they leave, Daphne appears and restarts the carousel.

The next morning, Quentin rushes downstairs and wakes Julia, who had fallen asleep in the drawing room. He excitedly reports that the children are fast asleep and everything appears to be fine. Quentin is ecstatic that the children are safe, but Julia is still skeptical. She points out that the house was still in ruins and they must still be on alert at all times.

Later that day, David goes to visit Hallie and is upset at her for running out of the playroom the previous night. Hallie doesn't care and just wants everything to end, but he brings up her strange behavior while they were in the playroom. She tells David she doesn't remember anything and decides to take the dress and put it back in the attic.

At night, Quentin is having a drink in the drawing room and joking with Julia about how he currently doesn't have a woman in his life. Julia suggests he is merely looking for a drinking partner rather than a woman, at which point Quentin puts down his drink. Julia is preparing to go into town in hopes of finding more information about Gerard. Before she leaves, Quentin compliments Julia on the perfume she is wearing, but Julia reveals she isn't actually wearing any. Julia asks him to describe the smell in the room, since she can't smell anything, but Quentin says he can't think of how to describe it. After Julia leaves, Quentin realizes it's the smell of lilacs.

Julia is walking through the graveyard and notices Quentin is there. Julia tells him there are no records in Collinsport of anyone by the name of Gerard Stiles. She shows Quentin his grave and that of Daphne's, and asks if her name means anything to him because he was very involved with her in the future and a scent of lilac followed her wherever she went. The lilac information strikes Quentin, but doesn't tell Julia he smelled lilacs in the drawing room. The two then leave and return to Collinwood.

In the Collinwood foyer, Hallie tells David she has put the dress back in the attic. She begins to hear the playroom music, but David is unable to hear it. David thinks she is making it up and leaves the house.

Hallie, who appears to be possessed again, returns to the playroom.

Hallie enters the playroom and sees Daphne. Daphne holds up the dress that Hallie put away moments earlier, but Hallie refuses to take it. A few moments later, she nods at Daphne and accepts the dress.

Meanwhile, Quentin is in the drawing room, thinking of Daphne and the scent of lilacs. He eventually falls asleep and starts to dream. In his dream, Daphne enters the drawing room at Collinwood and places a bouquet of lilacs on the table. Quentin approaches her and smiles, but Daphne walks away. Quentin wakes up and sees the lilacs on the table. He picks them up and calls out for her.

Dark Shadows Every Day - Episode 1076 - Say Yes to the Dress 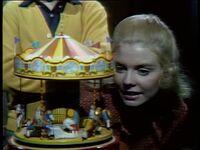 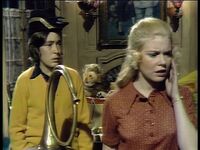 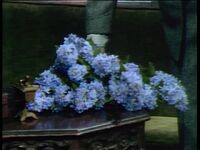 Lilacs
Add a photo to this gallery
Retrieved from "https://darkshadows.fandom.com/wiki/1076?oldid=142232"
Community content is available under CC-BY-SA unless otherwise noted.